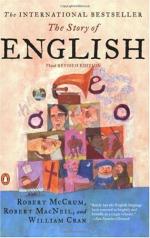 The Story of English Chapter Abstracts for Teachers

• The authors note that the English language brings together many influences in one place.

• In their record of the language, the authors rely upon literature, news, voice recordings, songs, and the like in order to tell a general story about the history of the English language.

• The English language is in constant flux and is always adding and losing terms, pronunciations, and the like.
• It has been hard to know how the English language sounded in its various forms until voice recording, but its genius is still available.

• English speakers have a natural way of knowing what words go where even with fewer concrete rules about grammar than some other languages.

• This implicit sense of appropriateness gives English its own ebb and flow that can be aided by lexicographers but not stopped.
• The English language is hard to write about, particularly because it is...

The Story of English from BookRags. (c)2021 BookRags, Inc. All rights reserved.