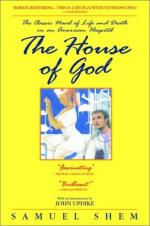 4. Why does Potts feels guilty about Elliot Needleman's death?
(a) Because he ignored his cry for help.
(b) Because he thinks he should have sent him to surgery sooner.
(c) Because he gave him the wrong medication.
(d) Because he misdiagnosed him.

6. Potts speaks of how he is strangely jealous of his brother because his profession is what?
(a) A construction worker.
(b) A lawyer.
(c) A stay-at-home dad.
(d) A plumber.

7. What does the the term "slurpers" refer to?
(a) Those who always have food on their face.
(b) Those who beg for compliments from people.
(c) Those who suck up to people above them in the hierarchy.
(d) Those who who take credit for things they didn't do.

8. Why is Otto Kreinberg allegedly so bitter?
(a) He wrote a book and no one bought it.
(b) He's mad he didn't get a Nobel Prize for his invention.
(c) He claims someone stole his invention.
(d) He never wanted to be a doctor.

9. What was Chuck the only of in his ward?
(a) Handicapped.
(b) Homosexual.
(c) Latino.
(d) African-American/black.

10. What is Chuck's excuse for being late to rotation?
(a) He overslept.
(b) He had to get his car fixed.
(c) He was with his girlfriend and lost track of time.
(d) He got caught in traffic.

11. Who are the first two people Roy meets in the EW?
(a) The two pretty nurses.
(b) The two policemen.
(c) Berry's look-alike and her sidekick.
(d) The chief resident and his protege.

12. Roy found Molly in tears one day for what reason?
(a) She found a mole on her leg she thought was cancerous.
(b) She found out her parents were getting divorced.
(c) Her boyfriend broke up with her.
(d) She had a headache and was convinced she had a brain tumor.

2. What kept being written next to Roy's name all over the hospital?

3. Who was the president at the time in which the novel was set?

4. What does Roy use to remember medical facts?

5. The Grenade Room was called that because why?