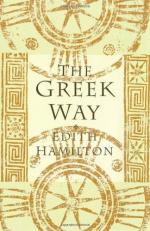 Allow the class to brainstorm about life in ancient Egypt. What would they do if they lived during that period? Have a student list the ideas on the board.

Allow the class to dress in Green costumes and bring in Greek food for a banquet. Assign a group of student to provide the entertainment.

Assign students to four groups, one for Buddhist, Greek, Hindu and Egyptian. Have each group find copies of works of art from the period. Allow the class to have an art show exhibiting the works.

Pindar wrote of the athletes who took part in the games. He represented the austere school of Greek Poetry. Have the students work in teams of three and prepare sports reports written in the austere manner and present the reports to the class in a mock spots cast.