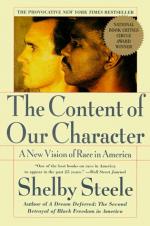 The Content of Our Character: A New Vision of Race in America Test | Mid-Book Test - Hard

1. In what way did Steele say 'black innocence affects society and the government?

2. In Steele's mind, what undermines the struggles for freedom?

3. Dealing with doubt does what for blacks, in Steele's estimation?

4. Rather than doing away with racial insecurities, what type of state did Steele say many blacks fall into?

5. What nickname did Chapter 4 say some blacks are given when they strive for achievement?

1. How did Steele say race-holding negatively affects the civil rights freedoms won decades ago? What must blacks do to avoid this?

2. In Steele's opinion, why is the black, underclass group continually expanding?

3. Steele articulated, when blacks feel powerless in white society, they deal with it in one of two ways, by challenging or bargaining. Describe what he means by this.

5. Steele talks about forgetting that he is black while writing this book. What did he mean by that?

6. According to Steele, how does black nationalism ultimately affect blacks?

7. What did Steele mean when he said the discussion of race relations has become scripted?

8. In Chapter 1, Steele said the only way to do away with racial problems is for all to move from a racial consciousness to a moral consciousness. What does that mean?

9. In line with Steele's experience, how are individualistic blacks received by those who have conformed to the 'black identity'?

10. According to Steele, the processes that drives one's mind are standard across racial / ethnic lines. Why is this an important observation?

How did Steele define white guilt? How are whites challenged by this guilt? Do blacks use this as a tool to get ahead? If so, how? How does black power produce white guilt? How do whites attempt to escape from the guilt? How is white guilt an especially big problem at the university level?

Steele said that integration shock produces a new form of segregation that takes three forms. What are those three forms? Define each form. What did Steele say eradicating these forms of segregation would lead to for blacks?

The Content of Our Character: A New Vision of Race in America from BookRags. (c)2022 BookRags, Inc. All rights reserved.