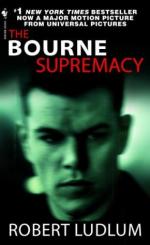 Robert Ludlum
This set of Lesson Plans consists of approximately 158 pages of tests, essay questions, lessons, and other teaching materials.

2. In addition to being the Foreign Service Officer, who is Alexander Conklin?
(a) Webb's friend.
(b) Webb's enemy.
(c) The Medusa Foreign Officer.
(d) The operator for Treadstone-71.

3. While in the foothills near Gongbei, what is the signal that indicates the conference is on?
(a) A Morse code signal.
(b) Two campfires.
(c) Four guards around a campfire.
(d) A burning campfire.

5. When Webb receives Marie's note after his run how does he react?
(a) He calls Marie back.
(b) He lesiurely heads home.
(c) He ignores the note.
(d) He frantically races home.

7. What does Bourne recall as he anticipates attacking the men at the campfire?
(a) All of the above.
(b) A bloody river.
(c) His floating dead family members.
(d) A bloody handprint.

8. What does Jiang Yu say to Webb while at the French restaurant that causes Webb to freeze?
(a) Jiang Yu quotes specific words that were supposedly located in Medusa files.
(b) Jiang Yu reveals that he is the impostor Bourne.
(c) Jiang Yu quotes a code phrase that only McAllister knows.
(d) Jiang Yu tells Bourne that Marie is in grave danger.

10. While making calls to gather information about Marie's and McAllister's "disappearances," what does the final person with whom Webb speaks state?
(a) There is a man in Washington he needs to find.
(b) Webb is being targeted for murder.
(c) He believes Webb's wife has been kidnapped.
(d) Medusa is a figment of his mind.

11. After being dragged into the woods, how does the third contact feel about his fate with Webb?
(a) Nervous.
(b) Anxious.
(c) Saddened.
(d) Optimistic.

12. Which of the following characters senses something is wrong during the conversation between Webb and McAllister?
(a) Marie.
(b) McAllister.
(c) Havilland.
(d) Yao Ming.

15. Which of the following helps Webb locate the taipan with whom he is supposed to meet?
(a) All of the above.
(b) A caricature whore.
(c) Guards holding radios.
(d) An out-of-breath Chinese man in a business suit.

1. While in Conklin's apartment, what do Conklin and Webb work on together?

2. While still under cover of the woods, where does the third contact tell Webb the impostor Bourne is?

3. What does Conklin tell the Chief of Internal Security as part of his and Webb's plan?

4. In the arcade, Webb's second call is to whom?

5. From what disease does David Webb suffer?