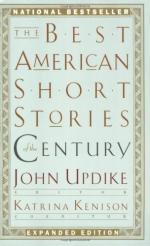 Katrina Kenison
This set of Lesson Plans consists of approximately 116 pages of tests, essay questions, lessons, and other teaching materials.

1. In "Theft" what is the main character doing when the thief enters her apartment?
(a) Eating.
(b) Talking on the telephone.
(c) Taking a bath.
(d) Sleeping.

2. In "The Country Husband" what event happens at the beginning of the story?
(a) Someone dies.
(b) Two people get married.
(c) A plane crashes.
(d) A house burns down.

1. In "My Dead Brother Comes to America," why is the mother nervous to see the father?

2. In "The Resemblance Between a Violin Case and a Coffin," what happens to Richard?

3. In "Theft" what does the main character try to give the thief?

4. In "The Other Woman," in front of whom does the storyteller cry?

5. In "The Other Woman" the storyteller receives a letter from his fiancee. What does the letter say?

1. How is "The Resemblance Between a Violin Case and a Coffin" a story about coming of age?

2. In "My Dead Brother Comes to America," what does the father do to show he cares for his family?

3. Why do you think the murderers in "The Killers" belittle the restaurant patrons and take them hostage? Was this necessary?

4. In "The Killers" why doesn't the author tell the reader why Ole Anderson is going to be murdered?

6. Describe the marriage between Julia and Francis in "The Country Husband."

7. In "The Country Husband" what does Francis' recollection of the maid add to the story?

8. In "The Other Woman" do you think that the man truly loved his wife?

9. In "My Dead Brother comes to America," why do the authorities hesitate to let the family off the ship?

10. In "That in Aleppo Once..." do you think the wife ever actually existed?

More summaries and resources for teaching or studying The Best American Short Stories of the Century.

The Best American Short Stories of the Century from BookRags. (c)2021 BookRags, Inc. All rights reserved.