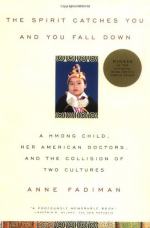 2. Translated, what does "qaug dab peg" mean?
(a) The spirit catches you and you fall down.
(b) One with many siblings.
(c) The lost soul.
(d) One who is sick with seizures.

4. Physicians did not recognize what in the Hmong culture?
(a) Their medical practices.
(b) Their beliefs.
(c) Their language.
(d) Their age.

5. At the end of Chapter Three, Lia had a diagnosis of what?
(a) Developmental delays.
(b) Epilepsy.
(c) Flu.
(d) Sinus infection.

6. What do Americans think of the ritual used in the Lee's celebration?
(a) They have no feelings about it.
(b) It makes them angry.
(c) They like it.
(d) They are uncomfortable with it.

7. Before Lia was taken, the family was not given what?
(a) A chance to defend themselves.
(b) Any advance warning.
(c) Paperwork.
(d) A chance to talk to the doctors.

9. What does the author say the culture and fate of the Hmong people is seeped in?
(a) Religon.
(b) Myths.
(c) Years of tradition.
(d) The war.

10. What kind of connotation comes with the Miao or Meo name?
(a) Guilt.
(b) Honor.
(c) Prestige.
(d) Something not favorable.

11. What complication occurred because of the breathing issue during seizures, as described in Chapter Five?
(a) She would have enough seizure.
(b) Her convulsions would get worse.
(c) She would begin to throw up.
(d) Her brain lost oxygen, which can cause permanent damage.

12. Why did the Hmong people have these feelings about American doctors at that time?
(a) A Hmong woman came back to a camp with not favorable things to say.
(b) They did not believe in anything but shaman.
(c) They did not think the doctors believed in the same things they did.
(d) They had heard stories written in a book.

13. What kind of care did they provide to their patients?
(a) Poor quality.
(b) Inattentive.
(c) High quality.
(d) Lackluster.

14. Who is with Foua Lee when she goes through childbirth?
(a) She is surrounded by her other sleeping children.
(b) Her husband.
(c) A midwife.
(d) A doctor.

1. Who did the Lee's invite to their home after Lia returned in Chapter Nine?

2. Besides language, what else does the cultural barrier make difficult for doctors and Hmong patients?

3. How many translators did Anne employ?

4. What happened to six of the Lee children before the family immigrated to America?

5. What was the only instrument the Lee family treasured?