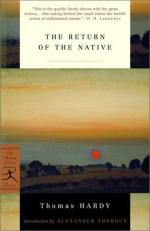 The Return of the Native Fun Activities

Thomas Hardy
This set of Lesson Plans consists of approximately 111 pages of tests, essay questions, lessons, and other teaching materials.

Create your own shadow box using art supplies and found objects to create the heath.

Draw a portrait of the reddleman.

The heath is described in great detail. Draw a map of all that is contained in the heath.

Write a script for one of the scenes and organize a group of students to act out the scene for the class.

Create a costume for your favorite character and come to class dressed as your character. Give a presentation on the role of your character in the novel, as well as the reason why you chose that character.

Many scenes in this novel are similar to soap operas. Choose a soap opera and write a short essay comparing the soap opera to the novel.

The Hero and Heroine

Clym and Thomasin are considered the hero and...

More summaries and resources for teaching or studying The Return of the Native.

The Return of the Native from BookRags. (c)2022 BookRags, Inc. All rights reserved.