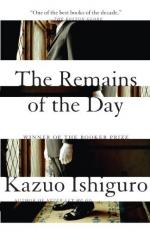 The Remains of the Day Short Essay - Answer Key

1. Describe the story line in THE REMAINS OF THE DAY.

THE REMAINS OF THE DAY is the story of an aging butler named Mr. Stevens who recalls his life of professional service and personal disappointment while employed at Darlington Hall in England for thirty years.

2. How does the novel begin?

As the novel begins, Stevens is debating whether or not to take a road trip while the master of the house, Mr. Farraday, his current employer has gone abroad for a few weeks. Mr. Farraday has suggested that Stevens might benefit from a little time away, but Stevens declines, citing his duties at Darlington. The topic has come up because Stevens received a letter from Miss Kenton, a former housekeeper at Darlington. Stevens believes she may want to return to employment at the grand house.

Miss Kenton married and has been away from Darlington for twenty years, but a recent divorce has left Miss Kenton with no future plans. She has written to Mr. Stevens about her personal dilemma. Stevens does not want to read too much into Miss Kenton's letter, but Darlington Hall is grossly understaffed now that Mr. Farraday is the new owner and it would be a delight to have her return.

The Remains of the Day from BookRags. (c)2022 BookRags, Inc. All rights reserved.