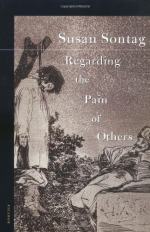 Regarding the Pain of Others Fun Activities

Research and provide copies of the images to which Sontag refers in the book. Discuss your interpretations of the images. Did you agree with Sontag's reading? Were these images exploitative, opportunistic? Did they make a political statement? Did they cause you to rethink your opinions of war or military intervention?

Bring in examples which demonstrate the contrast between respected news media outlets and tabloids. Discuss the differences in images, captions and headlines. Applying what you've learned from Sontag's book, discuss the...

Regarding the Pain of Others from BookRags. (c)2023 BookRags, Inc. All rights reserved.