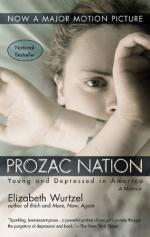 Elizabeth Wurtzel
This set of Lesson Plans consists of approximately 122 pages of tests, essay questions, lessons, and other teaching materials.

The protagonist and author of the autobiography, Wurtzel documents her life from the age of eleven until she finds the Prozac drug in her twenties. Wurtzel is eventually diagnosed with atypical depression, which is why she is a difficult case to diagnose and treat over the years. In addition, while she is experiencing many of her depressive episodes, mental health is still a hush-hush topic that is not open in society. By the end of the novel with the introduction of the Prozac drug, society and mental health depression as a whole will be a much more discussed topic.

In her childhood, Wurtzel lives with her mother and deals with the frustrations of having divorced parents who fight often over her disease. In addition, her father's reluctance and often refusal to pay her medical insurance bills makes her life more difficult and exacerbates her depression. Wurtzel...