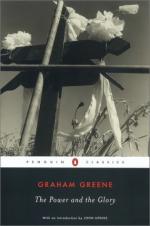 The Power and the Glory Character Descriptions

The protagonist of the story, he is not given a name. He is a Roman Catholic priest on the run from the authorities in a Mexican state that has outlawed religion.

The Lieutenant is the antagonist of the story and is also never given a name. He is an atheist who has an intense hatred for the Catholic Church.

Referred to as "half-caste," the priest first encounters him lying in a hammock on his way to Carmen. The man has only two teeth that look like yellow fangs.

Sometimes called the jefe, he is the lieutenant's boss. He however does not have a serious commitment to finding the priest.