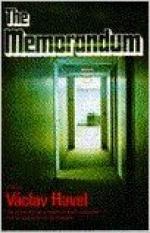 3. Who vocally protests the use of Ptydepe in unison?

4. In a broader interpretation, what is the one thing that bureaucracy relies on to keep its power?

5. What is Maria's reaction to Gross' reason for staying?

In Scene 5 of Act 1, an important point is made with the correlation between Gross' pursuit of knowledge (the translation of the memo) and his lack of knowledge. This creates a never ending circle where no logical way out exits for Gross.

1) Explain in detail what the significance of the knowledge is to the play in general, and in the scene specifically. Also, describe the irony of Gross' situation. What does the fact that he cannot answer the questions correctly symbolize? His lack of answers also displays a lack of something else. What is it and is why is it important to the point Havel is making about bureaucracy overall?

2) Staying with the theme of knowledge, which characters are allowed to have it? Do they really possess it, or is it only a perception portrayed to the characters that are kept from knowledge? Why is this necessary for the people to retain their power?

One of the characters that display Havel's satire the most is Hana. Describe her actions throughout the play and how they become a part of the humor that accompanies satire. Also, what is her place within the bureaucracy and what do her daily activities say about it in a larger sense?

As the play ends, there are two possible outcomes for Gross based on the decision he makes. Use the following format to present a case for both. Make sure to include examples from the play to support your cases.

1) First, explain why Gross' decision means that he will most likely never be able to make a difference at the company, and eventually might even stop trying altogether.

2) Second, explain why Gross' decision means that he will continue to fight from within the company, and eventually make a difference by stopping the bureaucracy, and gaining his independence in the process.

3) Finally, explain what will happen in your opinion. Which one of the above cases do you agree with and why?