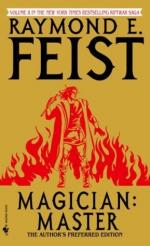 He has connections to many of the characters in the book but doesn't appear in every chapter.

When he was a boy he was given magic items that once belonged to an ancient Valheru named Ashen-Shugar.

The Huntmaster of the Kingdom, he is the illegitimate son of Duke Borric. He has an option to claim the throne but defers to his younger brother.

A mysterious magician that shows up to help the people of Midkemian at different places throughout the story.

A Midkemian musician, he teaches Kasumi the ways of the Midkemians and helps to bring the offer of peace to King Rodric. He is Pug's good friend.

The cousin of Arutha and Lyam. He takes the Prince of Krondor captive trying to claim the throne. The Prince dies in the dungeon.

The youngest son of Duke Borric...