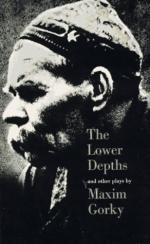 Maxim Gorky
This set of Lesson Plans consists of approximately 92 pages of tests, essay questions, lessons, and other teaching materials.

2. Who admits to the others that she lies to herself and invents a life of happily ever after for herself?
(a) Nastya.
(b) Anna.
(c) Natasha.
(d) Vassilisa.

1. What does Tartar relate goodness to?

2. What profession does the second thing missing from the set go with?

3. Who lies up on top of the stove coughing in the fourth act?

4. What is the first thing mentioned missing from the set in the fourth act?

5. Who tells a sad love story?

More summaries and resources for teaching or studying The Lower Depths.