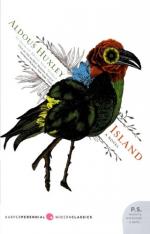 2. What does Mr. Bahu keep trying to convince Will about?
(a) The importance of investing young
(b) The legitimacy of his heritage
(c) The futility of Pala's continued way of life
(d) How evil the island truly is

4. How does Will arrive on the island?
(a) He is there studying the fauna
(b) He crash landed there and was pulled from the plane wreckage
(c) He was marooned by shipwreck
(d) He went there for a vacation

8. What was the paper in which Andrew MacPhail read about animal magnetism?
(a) "The Lancet"
(b) "The Speculum"
(c) "The Scalpel"
(d) "The Stethoscope"

9. Who was Andrew MacPhail's second patient after the Raja?
(a) The Rani
(b) Their son
(c) Their daughter
(d) An advisory council member

10. How does the Rani view women?
(a) All women are deceitful temptresses
(b) All women are to be servants of the men
(c) Beings to be used for pleasure
(d) Essentially holy

11. What was the first thing Will did when he awoke from his nap?
(a) Went to the bathroom
(b) Called for Molly
(c) Started up a conversation with the people who were there
(d) Resumed reading

12. Why does the Rani want to sell the oil to Southeast Petroleum?
(a) She knows the owner, Joe Aldehyde
(b) They will give all the money to charity
(c) They have offered to industrialize Pala free of charge
(d) They are offering the best price

14. What was the image that nurse Appu saw in her minds eye that made her laugh
(a) Their kitten chasing yarn
(b) A bear on a unicycle
(c) A pedantic teacher on too much caffeine
(d) The pyramids in white cloth

15. After Murugan resisted the temptation of the young girl, who did they send?
(a) A middle aged goat
(b) A councillor
(c) A young boy
(d) An older woman

1. Who wrote the poem that Will found in the book?

2. What is the major trouble for Pala?

3. Pala was what when Andrew and the Raja were reinventing it?

4. What dialect of English did the Palanese have?

5. Why didn't Rachel satisfy Will?