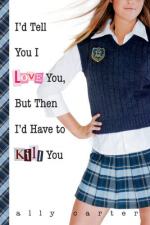 I'd Tell You I Love You, but Then I'd Have to Kill You Chapter Abstracts for Teachers

Ally Carter
This set of Lesson Plans consists of approximately 158 pages of tests, essay questions, lessons, and other teaching materials.

• Cammie attends the Gallagher Academy for Exceptional Young Women which is a cover for intelligence operatives training academy.

• Cammie's mother, Rachel Morgan, is the headmistress. Cammie and her best friend, Liz go to dinner wondering where Bex, another friend is.

• They find out from Anna that Buckingham will not be teaching Covert Operations that year. Rachel gives the welcoming speech.

• As she talks a handsome, debonair man enters the Great Hall.

• Bex shows up. She tells the other girls the man is Joe Soloman, a friend of her father's. He will be teaching Covert Operations.
• On the first day of class the girls find that Covert Operations will be held in the sub-basement. Solomon is late for class.

• Solomon arrives, quizzes them in various languages then has them close their eyes. He begins asking them about his appearance.

• Solomon has been a spy for eighteen years...

More summaries and resources for teaching or studying I'd Tell You I Love You, but Then I'd Have to Kill You.

I'd Tell You I Love You, but Then I'd Have to Kill You from BookRags. (c)2021 BookRags, Inc. All rights reserved.