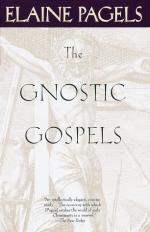 Elaine Pagels
This set of Lesson Plans consists of approximately 111 pages of tests, essay questions, lessons, and other teaching materials.

1. What did Muhammad and his brothers embark on in order to avenge the death of their father?

2. Valentine did distinguish between the creator, architect of the World, also known as the ______________, and the actual foundational spirit of the universe.

3. What did Muhammed believe might be in the jar that he and his brothers found?

4. The Gnostic texts call God _________ for punishing Adam and Eve for obtaining spiritual wisdom from a serpent.

1. What were Muhammed 'Ali al Summan and his brothers digging for when they made the important discovery?

2. How do the Gnostic texts portray the God that is present in the story of Adam and Eve in the tale of creation?

3. What are the two occasions described in the Bible in which the reappearance of Jesus might be called into question?

4. What did the Valentinians come to believe about the idea of God? What was He supposed to be?

5. What was the vision that John had, emotionally distraught over the crucifixion in the Apocryphon of John?

6. What is the Christian creed some believe was created in order to exclude Marcion?

7. Why did the orthodox preserve Christianity, according to the logic of Pagels?

8. What kind of criteria would the Gnostics give as being the true definition of a Christian?

9. Describe the idea of the social reality in which those who practice orthodox faith live.

According to Pagels, most of the Western religions realize that God is beyond the idea of gender.

Part 1: Do you think this it's important to determine a gender for God? Why or why not?

Part 2: Why do you think that many people believe that God is without gender?

Part 3: How do you think religion or spirituality changes when God is given a gender identity? Why?

Looking at the Bible in a different way is not always something that people are willing to do.

Part 1: Why do you think people are resistant to seeing the Bible in a new way?

Part 2: Do you think that it's a good idea or a bad idea to look at new perspectives in the Bible? Why?

Part 3: How do you think religion might change if the gnostic gospels were considered to be true? Why?

The Gnostics seem to lean toward a dualistic form of God, with one being lighter and another being darker.

Part 1: Do you think the dualistic views of God are important? Why or why not?

Part 2: How does having more than one view of God change a belief system?

Part 3: Do you think that it's easier or better to have one God? Why or why not?

More summaries and resources for teaching or studying The Gnostic Gospels.