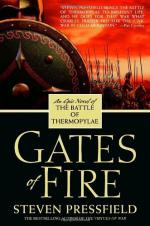 Steven Pressfield
This set of Lesson Plans consists of approximately 160 pages of tests, essay questions, lessons, and other teaching materials.

1. How does Rooster feel about Alexandros smuggling special salve for Xeones?
(a) He feels like Alexandros should just mind his own business.
(b) He does not care.
(c) He feels that it is reckless.
(d) He admires Alexandros' courage.

8. What is the purpose of the speech Leonidas gives after this battle?
(a) He berates them for their lack of courage and for their weakness.
(b) He congratulates them on the victory, and commends their behavior towards the prisoners.
(c) He congratulates them on their great victory and releases them for a day to pillage the city.
(d) He thanks the survivors and honors the fallen, while refocusing their attention on the main battle to come.

10. Why is Xerxes warned about the story of the Spartans?
(a) It is false.
(b) It contains much foul language.
(c) It is long and boring.
(d) It is difficult to understand.

13. How do the Spartans count their dead?
(a) They stand in formation and count off.
(b) They walk the field of battle and count the dead.
(c) The senior surviving officer calls out the names of the soldiers, and who ever doesn't answer is counted as dead.
(d) They each have half of a twig with their names on them, and the other half is in a basket. After the battle, they all match their halves to the others in the basket and count the remaining twigs.

15. Which of the following is not one of the activities listed as part of Spartan life?
(a) Spartans make sacrifices to their gods.
(b) Spartans love to fish.
(c) Spartans train at controlling their fear.
(d) Spartans wrestle and run.

1. What does Polynikes do after dealing with Alexandros?

2. What does Apollo tell Xeones about the spear in his vision?

3. What obstacle separates the two sides of the battleground?

4. What is the reason for Xeones returning to life?

5. How does Polynikes react to Alexandros' answer?