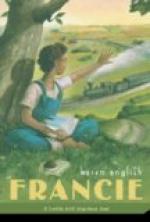 Karen English
This set of Lesson Plans consists of approximately 129 pages of tests, essay questions, lessons, and other teaching materials.

1. Who is Treasure and how does she frustrate Francie?

Young Francie, who washes clothing with her mother at Miss Beach's Boarding House for Colored, has been scratched four times by Miss Beach's cat named Treasure. Gathering linens from the guests' rooms, she plays with their belongings, but becomes startled by Treasure's appearance from under the bed. Treasure scratches her again, and she shoves him into a wardrobe, closes the door, and goes on about her work.

2. What are some of the cultural differences in Francie's world because she is a black girl?

In these two chapters, the cultural differences in Francie's world start to become evident. Her father is forced to work away from home, and her mother has more than one job on which she depends for survival. Even Miss Beach is light-skinned and well-to-do, and Mrs. Montgomery is white.