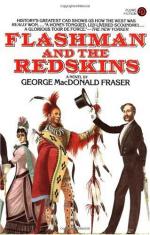 Flashman and the Redskins Fun Activities

Acting Out A Scene

Break the students into groups of 3 or 4. Have them pick a scene from the first three chapters to act out. Have them video tape the scene and show them in class.

Write a poem describing the Battle of Little Bighorn from Flashman's perspective. The poem can be in any style as long as it conveys Flashman's sentiments regarding the battle.

Have the students break into pairs. Have one student be the interviewer and one play a major character from Flashman. Videotape the actual interview and then have both students write a magazine article profiling the character.

Have each student find a song that they feel best represents the events in Chapters 5 and 6. Have them show why they believe that song is useful in interpreting those chapters and why they feel it represents them.

Write Your Own Article