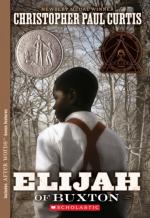 Objects & Places from Elijah of Buxton

This is a settlement in Ontario, Canada that was bought and founded by a reverend. The reverend gave his slaves freedom and allowed them to settle on the land, and then opened it to fugitive slaves from America. This place eventually grew into a complete community with businesses and a school.

This is a city in Ontario, Canada. This city has a post office and dry goods store that supplies the people of nearby Buxton.

This is what Elijah calls his sharpshooting skill of throwing rocks at targets.

These are items the preacher carries. The preacher apparently got these off of two...

More summaries and resources for teaching or studying Elijah of Buxton.