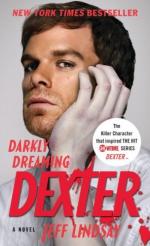 Jeff Lindsay
This set of Lesson Plans consists of approximately 105 pages of tests, essay questions, lessons, and other teaching materials.

1. Who encourages Dexter to kill people who deserve it?
(a) Deborah.
(b) LaGuerta.
(c) Father Donovan.
(d) Harry.

3. Who does Dexter tell about his discovery in his refrigerator?
(a) Nobody.
(b) LaGuerta.
(c) Deborah.
(d) Vince.

4. Where does the narrator take Father Donovan?
(a) To an abandoned house.
(b) To the ice rink.
(c) The police station.
(d) To church.

1. Who says, "you're different, Dexter. But you can learn to control that difference and use it constructively"?

2. Who is the narrator waiting and watching for in Chapter 1?

5. After killing Father Donovan, Dexter states that the Code of _____ was satisfied.

2. What is Detective LaGuerta's hypothesis as to why the Tamiami Trail Killer did not finish cutting his victim? What does Dexter find wrong with her hypothesis?

3. Describe Rita. Who is she to Dexter? How is she the perfect girlfriend for Dexter?

4. Why does Dexter attend the Metro's seventy-two hour meeting? Who is unhappy that Dexter is at the meeting? Explain.

5. Explain what Dexter believes the real Tamiami Trail Killer is going to do now that there has been an arrest in the murder case.

6. What object is sitting on top of the package of body parts found in the goalie's net at the ice rink? Who is the object left for? Why?

7. What does Dexter do on his date with Rita that upsets her? What is Dexter's reaction to the situation? What is he thinking about?

8. What is the relationship between Deborah and Detective LaGuerta? How does LaGuerta display her dislike in Deborah?

9. What gift does the intruder leave Dexter? What is symbolic of this gift?

10. Whose point of view the story is told from? How is this point of view useful in understanding the overall meaning of the novel?