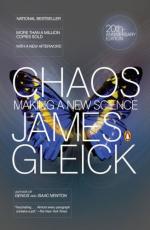 This quiz consists of 5 multiple choice and 5 short answer questions through chapters 7-8.

1. Who is attributed with the following quote in Chapter 5, "Strange Attractors": "Big whorls have little whorls which feed on their velocity, and little whorls have lesser whorls and so on to viscosity"?
(a) Mitchell Feigenbaum.
(b) Harry L. Swinney.
(c) Lewis F. Richardson.
(d) Johann Wolfgang von Goethe.

2. According to Gleick in Chapter 3, "Life's Ups and Downs," what will lead to an increased, steady state in the idealized population?
(a) A lower parameter.
(b) A multiplier parameter.
(c) A fraction parameter.
(d) A higher parameter.

4. What did Foucault use as a way to demonstrate the earth's rotation, according to the author in Chapter 2, "Revolution"?
(a) A softball.
(b) A turkey baster.
(c) A twenty-story high pendulum.
(d) A six-foot wide magnifying glass.

5. What is a measure of some property of a piece of software or its specifications?
(a) Cosmic arrhythmias.
(b) Fractal compression.
(c) Software visualization.
(d) Software metric.

1. According to Gleick in Chapter 3, "Life's Ups and Downs," what will cause the idealized population to end up at the lower level?

2. Who is attributed with the following quote from Chapter 6, "Universality": "The iterating of these lines brings gold; the framing of this circle on the ground brings whirlwinds, tempests, thunder and lightning"?

3. In what year was Mitchell Feigenbaum awarded the Wolf Prize in Physics?

4. What is a sub-discipline of fluid mechanics that deals with the natural science of fluids (liquids and gases) in motion?

5. What occurs at higher velocities where eddies or small packets of fluid particles form leading to lateral mixing?