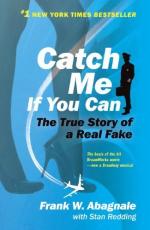 Catch Me if You Can: The True Story of a Real Fake Short Essay - Answer Key

Frank is six feet tall and weighs 170 pounds. He is only 16 years old in this chapter, but he looks like an adult compared to his juvenile friends.

2. How does Frank's father feel about Frank?

Frank's father trusts him, even though he should not. He is impressed when Frank chooses to get a part-time job working in a warehouse. He decides to let Frank have a credit card that he pays off himself using his earnings from the warehouse.

3. Why does Frank need money in order to pursue his interest in girls?

He buys items with his credit card, but does not take the items. Instead, the company keeps the item that Frank buys and gives him a lesser amount of cash instead. To Frank, it feels as though he is making money out of nothing, but actually, he is defrauding his father.