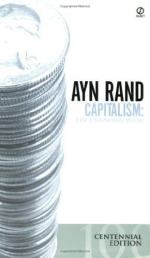 2. The existence of money promotes the division of what?
(a) Social classes.
(b) Labor.
(c) Specialties.
(d) Economic classes.

5. Who writes the chapter entitled "The Effects of the industrial Revolution on Women and Children"?
(a) Robert Lackser.
(b) Robert Gallegar.
(c) Robert Fulgrough.
(d) Robert Hessen.

1. The Aluminum Company of America is a monopoly in the sense that it has control over what?

2. What are ALCOA, General Electric and other companies said to be engaged in that cause them to be sued under the antitrust laws?

3. The first labor laws aimed at children target those working as what?

4. What does the term "evils of monopoly" refer to?

5. Copyrights apply to what?

1. What do the businessmen take the blame for in the case of the Central Pacific Railroad?

2. According to the author, how is science collapsing?

3. What is the gold standard?

4. What should the governments of free countries protect?

5. How are some of the railroads not responsive to the market?

6. How is banking controlled when the system is based on gold?

7. How does government involvement help cause the Great Depression?

8. What are the first labor laws concerning factories about?

9. How is intellectual property different than physical property?

10. Why do capital markets affect prices?