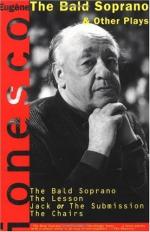 Eugène Ionesco
This set of Lesson Plans consists of approximately 144 pages of tests, essay questions, lessons, and other teaching materials.

3. According to Mr. Smith, what behavior do Mary and the Fire Chief demonstrate?
(a) Timidity.
(b) True love.
(c) Exhibitionism.
(d) Fiery anger.

7. According to Mr. Martin, what other job might a maid like Mary be able to perform?
(a) Firefighter.
(b) Seamstress.
(c) Detective.
(d) Typist.

9. Before he leaves, what comment does the Fire Chief make that causes embarrassment to the other characters?
(a) She always wears her hair in the same style.
(b) The bald soprano?
(c) It ticks.
(d) A truly Cartesian quarter of an hour.

15. According to Mr. Smith, if a schoolmaster teaches his pupils to read, what does a cat do for its young?
(a) Nothing.
(b) Sends them away.
(c) Suckle them when they are small.
(d) Teach them to hunt.

1. Whom does Mr. Smith believe is honest?

2. What comment does Mrs. Smith make about the Fire Chief's story, "The Headcold"?

4. Why is the Fire Chief disappointed?

5. What is the Fire Chief's verbal answer to Mrs. Smith's request?