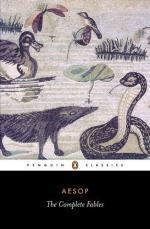 Aesop
This set of Lesson Plans consists of approximately 123 pages of tests, essay questions, lessons, and other teaching materials.

3. In "The Ploughman and the Eagle" who saves the ploughman from a collapsing wall?
(a) A halcyon.
(b) A hawk.
(c) An eagle.
(d) No answers are correct.

1. Whose statue is being offered for free in "Hermes and the Sculptor"?

2. In "The Middle-aged Man and His Mistresses" how many mistresses does the man have?

3. What item does the merchant sell in "The Man Selling a Holy Statue"?

4. In "The Fox and the Woodcutter" what do we learn of the fox?

5. In "The Raven and Hermes" which animal is caught in a snare?

1. In "The Kite Who Neighed" what happens to the kite?

2. In "The Two Cocks and the Eagle" how does the winner end up losing?

3. In "The Goat and the Donkey" why is the goat sacrificed?

4. In "The Lion and the Dolphin" why is the dolphin not able to help the lion?

5. In "The Fox and the Bunch of Grapes" what does the fox call the grapes even though he has not tasted them?

6. In "The Sorceress" why is the sorceress sentenced to death?

7. What does Hermes learn about himself in "Hermes and the Sculptor"?

8. In "The Raven and Hermes" why can't the raven be trusted?

9. In "The Fox and the Monkey Elected King" what does the fox do to the monkey?

10. In "The Frogs Who Demanded a King" what does Zeus do when the frogs demand a King?