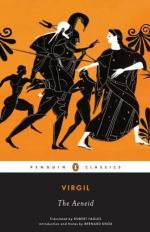 Virgil
This set of Lesson Plans consists of approximately 165 pages of tests, essay questions, lessons, and other teaching materials.

After being given as a prize of war to a warrior, this character becomes the ruler of part of his kingdom after the warrior was killed.

While developing into a great leader, this character struggles to reconcile duty to the gods and destiny with personal needs and wants.

This character causes the storm that drives the Trojan fleet onto the coast of North Africa in Book I.

Thinking the newly arrived Trojans are dangerous interlopers on Italian soil, this character opposes the proposed match between the Trojan leader and the land's local princess.

In the underworld, this character shows a visitor who the descendants of the visitor's line will be.

The founder of Alba...