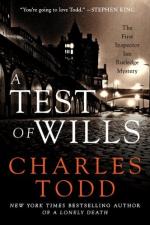 A Test of Wills Fun Activities

Caroline and Charles Todd
This set of Lesson Plans consists of approximately 141 pages of tests, essay questions, lessons, and other teaching materials.

Write a poem based on one of the themes of the novel using character names or setting locations to connect the poem to the novel.

Create a diorama of a major scene in the novel. Be careful to keep your diorama within the appropriate scale.

Create a collage with pictures from magazines or the Internet that depicts elements of the novel, such as a specific theme or setting.

Create a board game that takes players through the village depicted in the novel and involves the murder investigation as well as major characters from the novel.

Write a eulogy that might be read at Colonel Harris' funeral.

Write a diary entry as if you are Maggie/Helena and you are describing your desire to see the driver of the car in the fatal accident punished.