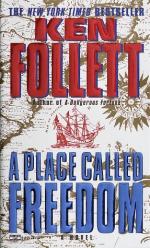 He began working in the mines at the age of seven and consulted a lawyer to learn the rights of the miners, an act which brings him into conflict with the mine owner.

She is outspoken and very independent and does not marry the man her mother favors for her.

He has affairs with slave girls in Virginia and is ultimately killed by Indians.

She is a London prostitute who marries a tobacco broker in Virginia.

Sidney Lennox is a tavern owner and undertaker in London who is sentenced to Virginia where he is ultimately killed by Indians.

She is a young girl who robs men in London, and she is eventually sold to a farmer whom she kills when he tries to rape her.

She is always fighting for her slighted son, and...