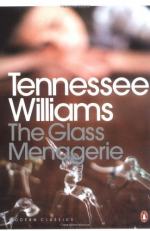 Get The Glass Menagerie from Amazon.com
View the Study Pack
View the Lesson Plans

Tennessee Williams
This student essay consists of approximately 2 pages of analysis of The Glass Menagerie.

During the The Great Depression family is all people had in those times, a lot of people want poor and had no place to go but out on the streets. So family is really the only thing that they got to turn too. Also during the Great Depression job very scares, so many people had no jobs, also because of the stock crash, the value of money went up, so many family that where some what stable would now become poor. So because of the Stock crash not very many jobs where available too all people at that time. The only thing that they had in that era is each other.

Williams argues that drinking in not good, too Amanda. Some people when dirking can be violent. . Many people will bet there wife. They can also cause a family too break apart. Drinking can cause your budget and cause argument between elders in the family. Often cause a strain in the budget, and a cause to split up. Money would be very scars as well so they would most likely have no money to spend. Many people fate people where intoxicated. Drinking is not a good so Amanda thinks.

Williams argues the family will be tested all the time but communication will help a family. Times where hard during that era, and family is all they had . How for can Amanda pushes before she can make one of them break.