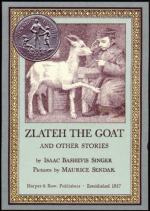 Isaac Bashevis Singer was born in Radzymin, Poland, July 14, 1904. His father was a fervently religious rabbi, a member of a Hasidic sect, and his mother was the daughter of a rabbi.

Isaac was the third of four children, all but the youngest of whom became writers. The works of Hinde Esther, the oldest, are scarcely known in this country. Israel Joshua, the oldest son, wrote The Brothers Askenazi and other novels after immigrating to the United States in 1933, where Isaac followed him two years later.

Singer had been writing essays and stories for Yiddish newspapers in Poland, but for several years after his arrival in New York he could write nothing except reviews for the Yiddishlanguage newspaper Jewish Daily Forward and other journals. Meanwhile, his first novel, Satan in Goray, was published in Poland, but he left before ever seeing a copy.