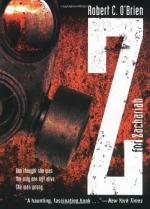 Robert C. O'Brien
This Study Guide consists of approximately 22 pages of chapter summaries, quotes, character analysis, themes, and more - everything you need to sharpen your knowledge of Z for Zachariah.

This detailed literature summary also contains Topics for Discussion and a Free Quiz on Z for Zachariah by Robert C. O'Brien.

Z for Zachariah is a novel by author Robert C. O'Brien. In this novel, a young girl named Ann Burden appears to be the only survivor of a holocaust that destroyed the majority of the United States, but left untouched the valley where she has lived all her life. Ann survives a year on her own, eating food from the local store and growing her own garden, until one day a man walks into her front yard wearing a strange suit. Ann is at first weary of her new companion, but when he becomes sick Ann feels she must do something to keep the only other person alive well. Little does Ann know that this new companion will prove to be something of a tyrant, a man who will make life with a companion far worse than life alone. Z for Zachariah is a novel of survival that will leave the reader wondering what they would do in Ann's circumstances.

Ann Burden has become aware of a person traveling on the roads outside of her little valley. When it becomes obvious this person intends to come into Ann's little valley, Ann hides all evidence of her existence and hides in a cave on the hillside. Ann is frightened that this person, the only other apparent survivor of a nuclear holocaust, will be someone who will mean her harm. Therefore, Ann has decided to wait and watch before letting this person know she is there.

The person arrives in the valley and he takes up residence in Ann's front yard. Ann watches from afar as the man explores the valley and takes a bath in Burden Creek which Ann knows is poisoned by whatever it is that killed everyone in the towns around the valley. Ann thinks she ought to tell him, but is still reluctant to reveal her existence. It is not until the man becomes terribly sick that Ann realizes this is the only other human being in the area and she does not want him to die.

Ann takes the man, whose name is Mr. Loomis, into her house and helps him through his illness. At the same time, Mr. Loomis helps Ann figure out how to get gas for the tractor so that she can plow and plant the fields of her father's farm. As Mr. Loomis struggles with his illness, Ann stays by his side, listening to his fever induced hallucinations. Over time, Ann comes to realize that Mr. Loomis, who was a scientist before the war, shot a co-worker when the co-worker attempted to take the only existing radiation-repelling suit to check on his family. This leave Ann a little fearful of Mr. Loomis.

As Mr. Loomis recovers from his illness, he begins to exert power over Ann by insisting on the planting of specific plants despite Ann's own experience and knowledge. Then one night Mr. Loomis sneaks into Ann's room and attempts to have sexual relations with her. Ann runs away. The following day, Ann returns to work the fields, but refuses to have any contact with Mr. Loomis. After a while, Mr. Loomis refuses to allow Ann to use the tractor. Shortly after this, Mr. Loomis locks the door to the store. When Ann comes into the yard of her own home, Mr. Loomis shoots her ankle in an attempt to force her to remain in the home with him. Instead, Ann is able to escape into the hills.

Finally Ann realizes that one of them has got to leave the valley. Ann decides it should be her. Ann steals Mr. Loomis' radiation-repelling suit and all his other gear, intent on finding other survivors somewhere outside of her valley. Mr. Loomis tries to stop her, but Ann steps into the hot zone and successfully escapes her tyrant.

More summaries and resources for teaching or studying Z for Zachariah.