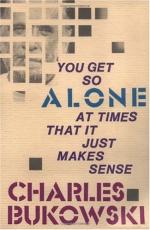 Charles Bukowski
This Study Guide consists of approximately 37 pages of chapter summaries, quotes, character analysis, themes, and more - everything you need to sharpen your knowledge of You Get So Alone at Times That It Just Makes Sense.

You Get So Alone at Times That It Just Makes Sense Summary & Study Guide includes comprehensive information and analysis to help you understand the book. This study guide contains the following sections:

This detailed literature summary also contains Topics for Discussion and a Free Quiz on You Get So Alone at Times That It Just Makes Sense by Charles Bukowski.

Chinaski is Charles Bukowski's alter ego, a misogynistic, crude poet with a cultish following. Chinaski's biography is identical to Bukowski's making him and the poet interchangeable in most respects. He is the narrator of the collection.

Chinaski grows up during the Depression and is known in his youth as a bullying jerk. He is not a man with an incredible amount of empathy, particularly toward women like his friend Mary Lou. By 17, he and his buddies are drinking and taking regular trips down to Mexico. Chinaski disappoints his father by moving away and becoming a writer, a profession that the father regards as useless.

Eventually settling in New Orleans, Chinaski cannot get published. He begins to starve, losing thirty pounds. At some point he resolves to give up writing for a while, take a series of menial jobs, and focus on drinking. He works at the Nabisko factory and at a Post Office. He has a series of affairs with older women and drinks prodigious amounts.

After a decade, Chinaski returns to writing and develops a reasonable following in America and a hysteric following in Europe. He meets most of the literary luminaries of the sixties and seventies and offends all of them. By the eighties, though, Chinaski has settled down. He still drinks himself into oblivion every night, but he does it at home with his 5 cats and his wife. He has put the brawling and whoring aside and now views the world with a sardonic inquisition.

Chinaski's all-American father figures prominently in several poems. His is the dissenting voice to Chinaski's working-class hedonism, a bourgeois self-improver who believes in the American dream, conspicuous consumption, and a strong work ethic.

In "retired" Chinaski lays out the tragedy of his father's life. He works every day of his adulthood and speaks relentlessly about the glorious retirement that waits him. Chinaski's father never sees that retirement, though. He dies suddenly one day, and all his friends say he looks young in his coffin. He never missed a day of work.

Chainski's father is presented as an overeating blowhard. He spouts self-help clichés and regularly refers to his son as a bum. When Chinaski is young and is failing school, his father is the overbearing threat in the room if things do not change. When Chinaski is starving as a struggling writer, his father sends him a letter saying he deserves his failure.

Chinaski's Mother is a meek, quiet woman who is easily overpowered by larger personalities. She appears in "education" at a conference with Chinaski's teacher. The teacher says Chinaski is not willing to learn, and his mother bursts into tears, begging the teacher to give her son one more chance. On the way home, Chinaski's mother is still crying, terrified of how her husband will react to the teacher's news.

Janeappears in bumming the Jane, I thought the stuff tasted worse than usua

Jane is Chinaski's lover during much of his decade-long hiatus from writing. He describes his time with her as among the happiest of his life. They drink to excess, shout at each other through the night, barricade themselves into their room, make love, and generally live life to the hilt. He is living with her around the same time he works at the Post Office.

Chinaski's wife at the time that he writes these poems is a largely silent figure though she is frequently referenced in the collection. Clearly, she and Chinaski live a relatively peaceful domestic existence. She is used to his excesses, buying him a steel wastebasket to avoid his setting the house on fire and warning him not to step on the cats when she is half-asleep and he is drunk. Clearly, Chinaski has modulated his recklessness for her, writing his poems longhand while she is asleep in "quiet" so as not to wake her. Chinaski portrays his wife and cats as clear-eyed companions of his later years, critical at times but utterly reliable.

The Man in the Brown Suit works at Chinaski's bank. When Chinaski is in line for the teller, this diminutive man with a spindly mustache often eyes him. Chinaski debates at length whether he should go up to the man one day and call him out. One day, however, Chinaski witnesses a large man harassing the teller, and the man in the brown suit springs to life. This tiny man single-handedly subdues the large instigator. From then on, Chinaski just smiles at him.

Joe O'Brienappears in a magician, gone...

Joe O'Brien is one of the finest jockeys Chinaski has ever witnessed. Smaller than most, he is able to rally a horse in the final lengths. He has just died in "a magician, gone..." and Chinaski thinks he will not easily be replaced. The other jockeys hold a small memorial at the track that brings tears to Chinaski's eyes.

Al is one of Chinaski's better friends. He has the constant problem of inviting women to move in with him that turn out to be crazy. It always happens immediately after they move in. He tries to make one go to a psychiatrist, but she refuses to continue after a couple visits. At one point, Al goes to a shrink himself, thinking this could be the result of some imbalance on his part. The shrink says he is perfectly sane, making Al feel even worse.

Alabamappears in bad times at the 3rd and Vermont hotel

Alabam is a thief that lives in the same boarding house as Chinaski during his decade of boozing. One night, Alabam comes into Chinaski's room while the latter is dead drunk. Chinaski tries to force him out, but he is far too inebriated. When he sobers up, he has sex with Alabam's girlfriend for revenge. Alabam is heartbroken, and Chinaski apologizes to him, offering to share a bottle of port with him.

John Fanteappears in the passing of a great one, the wine of forever

John Fante is a real author of American novels. Chinaski discusses their friendship in two poems, for Fante is the only author he has ever met that he truly admires. Fante goes to Hollywood eventually to write movies. There, his diabetes overtakes him and he loses a leg. Shortly thereafter, he dies an excruciating death, which unnerves Chinaski. In "the wine of forever" Chinaski reads one of Fante's books and feels as though his friend is with him.

Emily Bukowski is Charles Bukowski's grandmother. An old-fashioned and—by the author's estimation—dull woman, she does not partake of popular entertainment and thinks the devil is in her grandson. She thinks the same of her husband, from whom she is estranged. She dies one day while feeding her canary.

The Beautiful Lady Editorappears in the beautiful lady editor

The Beautiful Lady Editor publishes some of Chinaski's early work. When he is starving in a freezing shack, he writes her asking for help. She writes back to him that she is no longer in publishing, that she is in Italy helping the poor. Chinaski wishes desperately that he were there with her.

More summaries and resources for teaching or studying You Get So Alone at Times That It Just Makes Sense.

You Get So Alone at Times That It Just Makes Sense from BookRags. (c)2022 BookRags, Inc. All rights reserved.