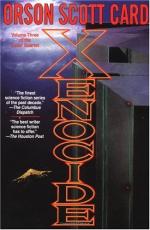 Orson Scott Card
This Study Guide consists of approximately 67 pages of chapter summaries, quotes, character analysis, themes, and more - everything you need to sharpen your knowledge of Xenocide.

This detailed literature summary also contains Topics for Discussion and a Free Quiz on Xenocide by Orson Scott Card.

Xenocide continues Orson Scott Card's Speaker series and is a worthy sequel to the series' second novel, Speaker for the Dead. Over three thousand years have elapsed on Earth since the human-bugger wars detailed in the first novel, Ender's Game. Having been sentenced to planet destruction by Starways Congress, humans on the Brazilian colony planet of Lusitania search for a way to avoid their fate and also to solve a host of other problems they are facing, not the least of which is the virulent descolada virus that infects the entire planet and is continually adapting itself in order to destroy humans and their fragile existence.

Fortunately for the inhabitants of Lusitania, they have a powerful ally named Jane, an entity more than three thousand years old who exists in the computer and ansible (long distance communication) networks. Jane, has the power to stop the fleet from destroying Lusitania but by doing so must reveal her presence to the Starways Congress which is certain to retaliate with her destruction. Not until Congress gives the order to use the mass destruction device on Path does Jane actually make the fleet invisible by intercepting all its incoming and outgoing communications. Congress wastes no time in enlisting the help of the planet Path where the inhabitants believe that the intellectual and social elite are spoken to by the gods. Starways Congress turns to the greatest of the godspoken, Han Fei-tzu, in order to find the culprit in the Lusitania fleet disappearance.

Inevitably, Han's daughter Gloriously Bright and her secret maid Si Wang-mu puzzle out the mystery of Jane's existence and, convinced that Jane must be working against the gods, Han's daughter alerts Congress and sets the wheels in motion that restore the fleet and will destroy Jane in several months. In an effort to recruit Han and his daughter to the Lusitanian point of view, Jane turns up information that reveals that Congress has perpetrated unspeakable crimes against the citizens of Path. She turns over evidence proving that Congress made genetic modifications to the original settlers on Path which live on in their descendants. According to her information, the godspoken were given genes that cause obsessive compulsive disorder but are taught that their compulsions are really the gods speaking. They are also artificially enhanced to be extraordinarily intelligent. Han Fei-tzu realizes that Congress gave the godspoken their intelligence in order to serve them and their OCD in order to control them. Han and his daughter have a difference of opinion about whether the Starways Congress serves the gods and begin to drift apart. Gloriously Bright spends her days trying to honor the gods and save her father's honor now that he has begun working against Congress in order to help Jane discover a way to save herself and all the inhabitants of Lusitania.

The leadership of the Lusitanian colony is under extreme pressure. Unknown to most of the colonists, Ender has brought the hive queen to Lusitania in order to reestablish the buggers as a species. Now, not only the humans but also the buggers and the indigenous pequeninos (piggies) face annihilation at the hands of the Lusitania fleet. The buggers and piggies soon form an alliance in order to survive. The piggies allow the buggers to make a home on their planet and permit them to pollute in order to create two colony ships, one for each species. Both piggies and buggers plan to get off the planet before Lusitania's destruction. While not wishing xenocide on either buggers or piggies, the humans on Lusitania debate whether or not to let them go since they will inevitably destroy all of humanity by carrying the descolada virus with them to other worlds.

Ender's step-son Quim goes on a mission to the forest led by Warmaker, the most belligerent of the piggy fathertrees. Having converted to a heretical version of Christianity, Warmaker is convinced that the piggies are God's true children and that the descolada is an incarnation of the Holy Ghost. That humans are destroyed by it, he argues, is a sign that they are unworthy in God's eyes. Upon his arrival, Quim is imprisoned by Warmaker in his trunk and denied the food that helps humans resist the descolada virus. For seven days Quim struggles valiantly and debates theology with Warmaker before succumbing to the virus. This is the first time since a pact was made between piggies and humans that the peace was broken and the colonists are outraged that the piggies would kill a priest. Riots break out in the colony and a nearby piggy forest - completely innocent of any involvement in Quim's death - is burned. Human and Rooter, two friendly fathertrees, appeal to the bugger queen for help. She puts bugger sentries in place and an uneasy peace is forced on humans and piggies. Ender's wife and Quim's mother Novinha blames Ender for not stopping Quim and leaves him.

With Jane acting as an interface between Han Fei-tzu, Wang-mu, Ender and several of his highly educated step-children, the think tank eventually begins to find solutions to the dangers they face. By questioning the hive queen about how she creates a new queen, Ender learns more about philotic technology and its role in Jane's birth. Jane, he discovers, was created by accident when the hive queen tried to co-opt him to her will using the philotic network. This revelation spells good news for Jane who will not be completely destroyed when Congress shuts down all the ansible computers in order to kill her. The other implication for Ender's group is that they use their knowledge of philotes and Jane's special abilities to develop a ship that can travel faster than light by traveling outside known space and then reentering at a desired destination. The initial test of the faster than light ship is successful but brings about some surprising results. Miro, Ender's crippled step-son, creates a healed body for himself while "outside" and Ender spawns a clone of his cruel brother Peter and a 13 year old angelic version of his sister Valentine.

By discussing the descolada with Ender's step-daughter Ela, Wang-mu asks questions that lead Elanora and her piggy associate Planter to realize that the descolada must have been engineered by unknown lifeforms in order to colonize space and terraform planets. Planter, worried that piggy consciousness may simply be an effect of the descolada, volunteers himself for an experiment that proves that piggies were and are conscious without the descolada. Sadly, the experiment costs him his life, since the descolada has adapted piggy DNA to be dependent upon the virus. Another of Ender's step-daughters, Quara, relents from her stubborn position of trying to respect the descolada as 'raman'- an alien species with whom humans can peacefully co-exist - and gives the knowledge of both how to create a bacterium that will destroy the descolada and a virus, the recolada, to replace it. The recolada still allows piggies to live as they always have and is harmless to humans. As a special gift for Han and Wang-mu's help, the xenobiologists on Lusitania develop another virus for Path, one that will erase the godspoken's OCD and extend the benefit of increased intelligence to the underclass on Path.

While the Lusitania fleet is still closing in on the planet at the close of the novel, all three species now have the means to get off the planet before its arrival. Wang-mu joins "Ender's children" (Peter and 13 year old Val) searching for new planets suitable for colonization. Han and Gloriously Bright never reconcile, and she eventually goes mad, but to all outside appearances she continues to live her life in such devotion to both her father and the gods that she is eventually created God of Path after her death. Novinha comes to lead her own life of devotion, inviting Ender to join the Children of the Mind with her. Not ready to commit to the Order's strict precept of abstinence in marriage, Ender promises to visit her monthly until he can make up his mind.

More summaries and resources for teaching or studying Xenocide.