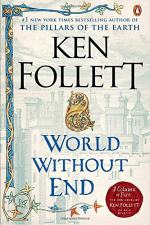 Follett, Ken
This Study Guide consists of approximately 107 pages of chapter summaries, quotes, character analysis, themes, and more - everything you need to sharpen your knowledge of World Without End.

This detailed literature summary also contains Quotes and a Free Quiz on World Without End by Follett, Ken.

Gwenda arrives in Kingsbridge during an annual festival day with her parents and siblings, including her older brother Philemon. The family is desperately poor and Gwenda steals the purse of a knight, Sir Gerald, who is in town with his family to settle a debt. Gerald has two sons, Ralph and Merthin, who meet up with a pretty, young girl who lives in Kingsbridge, Caris. The three children go into the forest to try out Merthin's new bow, and Gwenda's dog follows. They scatter when a knight, Sir Thomas, enters the clearing chased by two of Queen Isabella's soldiers. Ralph kills one of the soldiers with an arrow and Thomas kills another. Merthin winds up alone with Thomas and helps him conceal a letter. Thomas warns that the letter is dangerous and says Merthin should hand it over to a priest if Thomas dies. Thomas joins the priory at Kingsbridge. Unable to pay his debts because of Gwenda's theft, Gerald's family is forced into a life of poverty at Kingsbridge.

Caris is the daughter of the city's wealthiest wool merchant. She becomes friends with Gwenda though there is a huge difference in their lifestyles. While Caris becomes knowledgeable in the workings of the trade business, Gwenda's father seeks any means of keeping his family fed. At one point, he trades Gwenda to a group of criminals in exchange for a cow. Gwenda kills two outlaws in order to escape.

Ralph begins the life of a squire and spends years in war. He saves the life of a local earl, Roland. While fighting in France, he saves a prince. Though he is a cruel man, his actions eventually earn him a knighthood and set him as overseer of small villages and farmland. Gwenda happens to live in one of these villages, Wigleigh. As an adult, Gwenda marries the man she has always loved, Wulfric, after his parents and brother are killed in a bridge collapse. Gwenda knows Ralph is not going to let Wulfric inherit his family farm and she has sex with him, believing that will be enough for Ralph to grant Wulfric the land. Ralph still does not and Gwenda has a son who looks very much like Ralph.

Meanwhile, Caris has been in love with Ralph's brother, Merthin, for years, but she fears being tied down to a domestic life for any reason. Caris is strong-willed, which is how she comes up with a way of making scarlet cloth, the single item that saves many of the city's merchants from ruin when the price of wool drops. Many people love Caris but some hate her and she clashes with members of the priory over what is best for the city. When Caris is about to be hanged for witchcraft, she gives up everything and joins the nunnery. Over the years, Caris battles ignorance and tradition as she seeks the best way to deal with sickness. When the plague hits the area, thousands die but Caris begins to learn about the disease. She cannot cure it, but she is able to enact preventative measures that undoubtedly saves lives. By the time the plague strikes again, Caris has left the nunnery, married Merthin, and runs a private hospital near her home.

While Ralph is set on the road to knighthood, Merthin is apprenticed to a builder. He has a natural talent and is soon able to solve building problems that his mentor finds impossible. Merthin first comes up with a plan to build the main bridge into Kingsbridge, replacing one that collapses after years of erosion left the pilings unstable. When he loses that job, he moves to Florence where he marries, has a child, and hones his craft. His wife dies in the plague, along with all her family, and Merthin returns to Kingsbridge with his daughter. He proves that he is a competent builder and earns the contract to build a new tower adjacent to the existing church. He plans for it to be the tallest building in England, and he develops new ideas for dealing with each of the problems he faces.

Merthin and Caris become two of the most important people in Kingsbridge but their paths continue to cross the conservative monks of the Kingsbridge Priory. Caris's uncle, Anthony, was the first, but he died when the original bridge collapsed. Caris's cousin, Godwyn, was next, but he died of the plague. Gwenda's brother, Philemon, was named prior next, though everyone knows he is devious and greedy. When it becomes clear that he is going to be named to an even higher position, Merthin and Caris try to find a way to stop his promotion. Merthin, upon hearing that Thomas has died of old age, returns to the forest where he had first encountered Thomas all those years earlier. He digs up the letter and discovers a letter from King Henry II. Henry wrote that he was alive, despite the fact that everyone believed he was dead and that his wife was behind the attempt to murder him. Merthin realizes the value of this letter and he uses it to bribe an official to remove Philemon from the area, giving him a post far away from Kingsbridge. As the novel ends, Merthin and Caris are standing at the top of Merthin's tower, watching Philemon leave town.

More summaries and resources for teaching or studying World Without End.