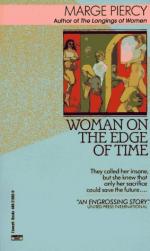 Woman on the Edge of Time Summary & Study Guide

Marge Piercy
This Study Guide consists of approximately 50 pages of chapter summaries, quotes, character analysis, themes, and more - everything you need to sharpen your knowledge of Woman on the Edge of Time.

Woman on the Edge of Time Summary & Study Guide Description

Woman on the Edge of Time Summary & Study Guide includes comprehensive information and analysis to help you understand the book. This study guide contains the following sections:

This detailed literature summary also contains Topics for Discussion and a Free Quiz on Woman on the Edge of Time by Marge Piercy.

This novel of speculative fiction tells the story of Connie Ramos, a middle-aged Hispanic woman with a troubled past who suddenly finds herself able to communicate with a future society. As she struggles in the present to retain her dignity and spiritual independence in the face of being diagnosed insane, Connie's experiences in the future awaken a fierce determination to not let herself be controlled or victimized. As the narrative details Connie's awakening consciousness, it also explores themes related to the nature of hope, relationships between parents and children, and the influence of the future on the present.

The novel begins with an intense scene of confrontation between Connie and her niece Dolly, a pregnant and drug addicted prostitute on the run from her abusive pimp. In the midst of Connie's attempts at comfort, the pimp arrives and beats both her and her niece into unconsciousness. Connie awakens to find herself in a mental institution, the pimp having brought her there and convinced the admitting authorities that his injuries (inflicted by Connie in self defense) were in fact the result of Connie's exploding into unprovoked violence. Because she has a history of such violence and of insanity, there were no questions asked and she was immediately sent into confinement.

During her imprisonment in the mental hospital, Connie makes contact with a being from the future, Luciente, with whom she had been in contact previously and who now offers to show her what life is going to become. Connie briefly becomes uncomfortable when she discovers that Luciente, whom she had thought was a man, turns out to be a woman, but soon lets go of her discomfort and travels (in her mind) to Mouth-of-Mattapoisett, Luciente's commune-like home. This is the first of several "trips" Connie makes to the future, where she discovers (among other things) that women, in the name of achieving true equality, have let go of that which has always made them truly unique - the ability to conceive and bear children. Childbearing, it seems, is now the function of a specialized machine housed in a building called the "brooder." Connie also discovers that defining identity by race or by sexual orientation has also been eliminated, that each individual in the community lives alone (in other words, the family unit has disappeared), that everyone works and celebrates communally, and that the community is under attack by people called The Shapers. These are scientists who refined the genetic experiments that led the community to taking the shape it has, and who want to continue their experiments in order to continue helping humanity "improve."

Back in the present, as Connie flips back and forth into the future, she is selected to be the subject of an experiment by the Shaper-like Dr. Redding, in which a small device implanted in the brains of people diagnosed as being chronically violent (such as Connie) electronically controls their emotions. As the experiment progresses, Connie comes to realize that those who have the implant soon lose the aspects of their personality that make them interesting, unique, and independent. This is only one of several experiences paralleling each other between the past and present, experiences that lead Connie to become more and more resistant to the idea of being manipulated against her will.

On a particularly traumatizing visit to the future, Connie is drawn by Luciente and other members of the Mattapoisett community into an armed battle with forces controlled by the Shapers. She is shocked to see that the enemy combatants have the faces of Redding and the other doctors in the present, leading her to the conclusion that the influence of the "shapers" in both time periods must be ended. With that in mind, she obtains some poison and puts it in coffee served to Redding and the others, destroying the "ancestors" of the future Shapers and, in doing so, stakes her own claim to freedom and to independence of thought and identity.

More summaries and resources for teaching or studying Woman on the Edge of Time.

Woman on the Edge of Time from BookRags. (c)2022 BookRags, Inc. All rights reserved.