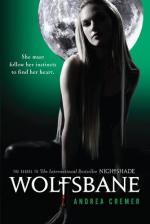 Andrea Cremer
This Study Guide consists of approximately 26 pages of chapter summaries, quotes, character analysis, themes, and more - everything you need to sharpen your knowledge of Wolfsbane.

Wolfsbane is the second in the Nighshade Series by writer Andrea Cremer. Calla Tor wakes at the beginning of this novel in an unfamiliar place, only remnants of a fight between her wolf pack, Keepers, and Searchers to tell her where she might be. A Searcher comes and suggests an alliance between them and Calla's pack. At first Calla is weary of these people who have been her sworn enemy all her life, but when she realizes that this alliance could give her and her pack the one thing they have always wanted, freedom, she agrees despite lingering uncertainties. Wolfsbane is a sequel that takes known characters and puts them in a situation that will both surprise and make perfect sense to faithful readers, continuing a ride that has already gone beyond suspense and into new territory that will only continue to thrill.

Calla Tor wakes in an unfamiliar room, wearing unfamiliar clothing. She quickly checks out her surroundings, searching for a means of escape even as remnants of her escape from Vail begin to drift to the surface of her memories. When a man comes into the room, a man she recognizes as a Searcher, Calla becomes defensive. Calla transitions into her wolf form and confronts the man, but returns to her human form when she realizes the man means her no harm. In fact, this Searcher, Monroe, wants Calla to form an alliance with him and his team.

Calla has been taught all her life that the Searchers are the enemy, that they are to be defeated at all costs. However, Calla begins to realize there is so much she never knew and so many lies she was told. Calla is reunited with Shay, her lover and the reason why she escaped Vail in the first place. Shay is not supposed to be her mate. In fact, Calla was supposed to kill Shay on the night of her ceremonial union with her chosen mate, Ren. However, Calla is in love with Shay and has recently discovered he is the Scion, someone of great importance in the war between the Keepers and the Searchers. Calla had no choice but to leave her pack behind and save Shay.

Now Calla is asked to go on a rescue mission with the Searchers to bring her pack back to their academy. Calla jumps at the chance, but realizes too late that the Keepers would have stopped the patrols around Haldis Cavern because Shay took the item that was being protected there. Instead of finding her pack on patrol, Calla and her Searcher crew run into the Bane pack. One of the Searchers is killed and Calla finds herself forced to injure a running mate of her mother's in order to avoid fighting her.

Back at the Searcher's academy, Calla tells the Searchers that something has changed among the wolf packs and they begin to theorize about what might be happening. They then tell Shay about the Scion's cross, a weapon that is thought to be able to banish wraiths. The object Shay and Calla found in Haldis Cavern is one section of this weapon, a sword hilt. Later, Shay and Calla also learn some more details of previous alliances between Searchers and wolf packs, including an alliance Ren's mother attempted to make with Monroe.

Calla's brother, Ansel, is found in Vail but he is injured when a Searcher mistakes him for an enemy. Calla quickly saves her brother by feeding him her blood, but then learns that the Keepers took away Ansel's wolf form. Not only this, but they killed her mother and have been torturing her entire pack for more than a week. It is decided that a rescue attempt must be made to rescue the rest of Calla's pack. However, the rescue goes much easier than anticipation, a fact whose cause becomes obvious when they return to their post in Denver and discover that the Keepers have arrived and destroyed it.

Calla now had most of her pack with her at the Searcher's academy, but Ren is not among them. Ren has made the choice to remain with his father in Vail despite the fact that it was revealed during the rescue attempt that Monroe is his father. Monroe's daughter, Ariadne, decides she must return for her brother and the only person who can convince him to join the Searchers is Calla. Hence, Ariadne and Calla return to Vail to try to convince Ren to join the alliance.

More summaries and resources for teaching or studying Wolfsbane.