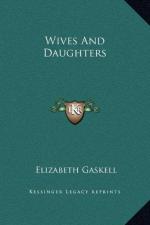 Elizabeth Gaskell
This Study Guide consists of chapter summaries, quotes, character analysis, themes, and more - everything you need to sharpen your knowledge of Wives and Daughters.

Hollingford is the town in which the novel takes place. It is based on the town the author, Elizabeth Gaskell was raised from the age of 13 months.

Molly's home is where she and Mr.Gibson have lived all of Molly's life. It is also where her father has his surgery, when he had the young men who were interning with him stayed. When he married Mrs. Kirkpatrick, she and Cynthia made it their home also. Most of the story takes place inside the Gibson home.

Hamley Hall is where the Hamley's live, it has been in the Squire's family for many years. No one in the town of Hollingford can remember a time when the land didn't belong to the Hamley's.

The Towers is where the Cumnor famliy lives. It is where Mrs. Gibson lived before she was married, and...