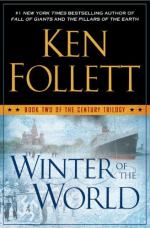 Winter of the World: Book Two of the Century Trilogy Summary & Study Guide

Winter of the World: Book Two of the Century Trilogy Summary & Study Guide includes comprehensive information and analysis to help you understand the book. This study guide contains the following sections:

This detailed literature summary also contains Topics for Discussion on Winter of the World: Book Two of the Century Trilogy by Ken Follett.

"Winter of the World" is a novel by Ken Follett which follows the lives of American, German, and Russian families through the 1930s, World War II, and through the rise of Communism in Europe.

When the novel begins, the world is at relative peace in 1933, but things quickly change for Germany as Hitler comes to power. Carla von Ulrich and her family, living in Berlin, witness first-hand the brutality of Hitler's rise. In England, Lloyd Williams and his family angrily watch as Prime Minister Neville Chamberlain makes concession after concession, first to the Fascists in Spain, and then to Hitler, doing whatever can be done to avoid war, period. In Russia, Volodya Peshkov, son of a Soviet general, becomes an intelligence agent, and begins building an espionage network in Berlin. By the mid-1930s, Lloyd has gone on to fight the Fascists in Spain in an international volunteer regiment. He falls in love with an American girl named Daisy Peshkov living in England, who is in an unhappy marriage to Lloyd's half-brother, Boy.

As World War II breaks out, England sees the defeat of Chamberlain and the rise of Winston Churchill. Churchill competently takes England through World War II, in which Lloyd fights, and Boy is killed. Lloyd is then able to marry Daisy. Volodya continues working intelligence for the Soviets, falling in love with an attractive female physicist named Zoya, By the end of the war, they are married, and Volodya has become disheartened with Communism. Carla's father is killed by the Gestapo, and she is raped repeatedly by Soviet soldiers. She marries the brother of her best friend, Werner, while the Americans and British begin aiding anti-communists in postwar Europe. The Soviet Union steals American intelligence to develop their own atomic bomb, and Carla hopes the world is headed for peace as the novel ends in 1949.