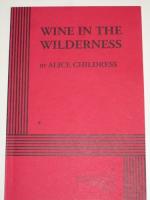 Wine in the Wilderness is Alice Childress' one-act play about the perception of black women among the African American community. The play is set during a race riot in Harlem, in New York City, in the 1960's.

As the play opens, an artist named Bill Jameson sits in his apartment waiting out another riot occurring outside. The interior of the apartment looks as if it has been destroyed already, but its exposed brick walls and related chaos are actually the work in progress of some interior decorating.

Bill answers his phone to discover that his friend, Sonny-Man, and Sonny-Man's wife, Cynthia, have found the perfect woman to model for Bill's latest work. Sonny-Man and Cynthia are stranded at a local bar, unable to return home because of the chaos outside. There, they've met the woman whom they think is ideal for Bill's painting.

(read more from the Summary Summary)