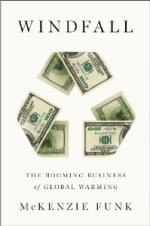 McKenzie Funk
This Study Guide consists of approximately 19 pages of chapter summaries, quotes, character analysis, themes, and more - everything you need to sharpen your knowledge of Windfall: The Booming Business of Global Warming.

This detailed literature summary also contains Topics for Discussion on Windfall: The Booming Business of Global Warming by McKenzie Funk.

In his first book, Windfall: The Booming Business of Global Warming, journalist McKenzie Funk takes a hard look at global warming from a money perspective. Six years of research took Funk all over the globe, exploring the many ways the world's climate is changing and the many people and companies who are looking for ways to profit from those changes.

Windfall is divided into three sections, each tackling a different form of climate change. "Part One: The Melt" takes the author to Canada, where consideration is being given to the defense of the Northwest Passage as melting ice makes the area an increasingly attractive shipping route. Another chapter in the section looks at the opportunities opening up for the once isolated nation of Greenland, where vast amounts of minerals are becoming more accessible as the country’s ice cap melts. Greenland's people must decide between seeking independence from Denmark as a means of keeping more of the wealth for themselves or remaining loyal to the country that has funded many amenities for them. Money is also at issue with Royal Dutch Shell’s dilemma over the future of its energy interests and how technology devised in a desert country might save the melting Alps.

"Part Two, The Drought" looks at dry conditions that have led to the burning of massive parts of Southern California and the Southwestern United States. Funk also explores how water is becoming a commodity that can be bought and sold in some areas. He tells the story of one entrepreneur who stands to buy up essentially all the farmland in one struggling African nation. The section’s final chapter introduces the concept of a wall of trees designed to hold back the encroaching Sahara while nearby European nations struggle to cope with Africans who want to migrate because climate change is taking away their livelihood.

"Part Part Three; The Deluge" looks at the plight of Bangladesh, which is being buffeted by a number of climate change issues. This section also includes Netherlands’ ongoing success in fighting back water and helping other countries learn to do the same.

The book concludes with a look at climate genetics and the geoengineering concepts that could be the solution to the world's water problems.

More summaries and resources for teaching or studying Windfall: The Booming Business of Global Warming.