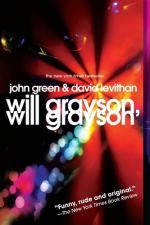 John Green (author)
This Study Guide consists of approximately 34 pages of chapter summaries, quotes, character analysis, themes, and more - everything you need to sharpen your knowledge of Will Grayson, Will Grayson.

Will Grayson, Will Grayson Summary & Study Guide includes comprehensive information and analysis to help you understand the book. This study guide contains the following sections:

This detailed literature summary also contains Quotes and a Free Quiz on Will Grayson, Will Grayson by John Green (author).

The following version of this book was used to create this study guide: Green, John & Levithan, David. Will Grayson, Will Grayson. Dutton, 2010.

Will Grayson (Narrator 1, who will be referred to as Will in this guide) and Will Grayson (Narrator 2, who will be referred to as Grayson in this guide) are both teenage boys who live in nearby cities in the Chicago surrounding area. Will is repairing his friendship with Tiny Cooper, his large, gay childhood best friend, after drifting away from him the previous year to find a Group of Friends. Will goes with Tiny and his friend Jane to a concert of their favorite band, which ends up being an imposter band. Tiny becomes drunk after his latest crush breaks up with him and Will and Jane bring Tiny to his home.

Grayson, on the other hand, is in a dark mental state, where he constantly thinks about killing himself or the people around him. His friend Maura pursues him romantically, but he is not interested because he is in a secret relationship online with a boy named Isaac, which is one of the only parts of his life that makes him happy.

Afterward, Grayson and Tiny remain in close contact, instant messaging each other every day. Tiny is producing a musical about his life in his high school and Will helps with the preparations. Grayson comes out to the people in his life and gains a new friend, Gideon, who is also gay. Grayson and Tiny continue to date, but Grayson notices that there are many aspects of their lives that differ from one another, like their wealth and mental health. Will gets into an argument with Tiny after he hears Tiny call him annoying. Tiny goes to see Grayson at his school, but they fight after Grayson says that Tiny does not love him, but rather loves the fact that he needs Tiny.

Will and Tiny reflect on their past and rebuild their friendship. Grayson attends the performance of Tiny’s musical, bringing with him a plan that he plotted with Gideon and Will. At the end of the play, Grayson stands up in the audience and says that he appreciates Tiny Cooper. Several people in the audience, who are also named Will Grayson, announce the same thing. Then, Will and Jane say how much they appreciate Tiny. Everyone else in the audience says it too.

Will Grayson, Will Grayson from BookRags. (c)2022 BookRags, Inc. All rights reserved.