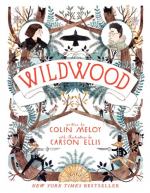 Ellis, Carson and Meloy, Colin
This Study Guide consists of approximately 81 pages of chapter summaries, quotes, character analysis, themes, and more - everything you need to sharpen your knowledge of Wildwood.

Wildwood by Colin Meloy is a children's fantasy novel that follows the adventures of seventh-graders Prue McKeel and Curtis Mehlberg as they travel into the Impassable Wilderness to rescue Prue's baby brother who has been abducted by crows. Prue and Curtis are classmates in St; Johns, though not exactly friends. Nevertheless, Curtis tags along on the adventure much to Prue's frustration. Soon after entering the woods, they encounter talking coyotes dressed in military uniforms and realize that this woods is unlike any other they have seen. The pair are separated, with Curtis being captured by the coyotes and taken to their warren and Prue escaping into the underbrush.

Curtis finds himself as the guest of a woman known as the Dowager Governess, a beautiful woman who commands the coyotes. She is taken with Curtis because he looks like her deceased son. Alexandra, as the Governess is also called, treats Curtis well, provides him with a new uniform, and offers him a position as second in command in her army. During a skirmish against a group of bandits in the woods, Curtis performs admirably. Afterward, he becomes full of himself as he basks in the praise of the coyotes and Alexandra. He considers leaving behind his life in St. Johns for a new life with the Governess. However, he discovers that she is the one who has taken baby Mac and plans to sacrifice the child to the ivy. The sacrifice will instill the ivy with incredible strength. Then, she will command it to destroy all of Wildwood and beyond. When Curtis refuses to join her, the Governess locks him in her prison.

Meanwhile, Prue finds her way to the Long Road and is picked up by Richard, the postmaster. He drives her to South Wood to see the Governor-Regent. South Wood's government is a disorganized bureaucracy. Prue does not get the help she needs to find her brother. Owl Rex, the visiting Crown Prince of the Avian Principality, tells her about the previous ruler, the Dowager Governess, who was exiled to Wildwood. He fears the Governess is amassing an army of coyotes and is worried about the attacks on his own borders. He also warns Prue to be careful of South Wood's government. He tells her these things just before he is arrested by the secret police and imprisoned. While all the other birds living in South Wood are rounded up and imprisoned, Prue manages to escape. She makes her way to Richard, who despite the risk to himself, smuggles her out of South Wood.

In the Avian Principality, Prue hitches a ride on the back of an eagle who has agreed to fly her to North Wood where she can seek help from the Mystics. While flying over Wildwood, they are shot down. The eagle perishes, but Prue is picked up by a group of bandits who live nearby. Safe in their camp, Prue meets Brendan, the Bandit King. She tells him about her search for baby Mac. A report of coyotes on the camp perimeter snaps Brendan into action, realizing that the coyotes are following Prue's scent. He quickly flees with her, so that the camp will not be discovered. Following a wild chase, they are captured by Alexandra. Brendan is imprisoned. Alexandra convinces an exhausted Prue to return home, assuring her that she will search for the baby herself.

Brendan and Curtis meet in the coyote prison, and the King learns of Alexandra’s plan to feed the ivy with human blood. In turn, the ivy will destroy the wood. Left unguarded, Curtis along with the help of Septimus, a rat he has befriended, devises an escape plan and frees himself and the imprisoned bandits. They return to the bandit camp only to find it greatly reduced in numbers following a skirmish with the coyote army. Brendan tells the remaining bandits of Alexandra’s plan and inspires them to fight to the death in order to stop the evil ruler from destroying the wood.

Meanwhile back in St. John’s, Prue learns that her parents, desperate to have a child, made a deal with Alexandra. With her powers of black magic, Alexandra enabled Mrs. McKeel to become pregnant with Prue. In exchange, they promised to give Alexandra their second child, should they ever have another. Prue’s parents believed that Alexandra had come to collect on her part of the deal and that they had no right to Mac. A stunned Prue returns to the wood, determined once again to bring her brother back home.

As Prue enters North Wood she encounters peaceful people and a farm-like community. She is taken by the friendly constables to meet with the Mystics by the old Council Tree. Following hours of mediation and communication with the tree, Iphigenia, the Elder Mystic, informs Prue and the community around her that they must assemble an army to fight against Alexandra. Prue learns that Alexandra plans to sacrifice Mac to the ivy and empower it to devour all of the wood. Aware that the bandits are also fighting against Alexandra, Prue proposes an alliance between the two groups. She rides ahead on her bike to locate the bandits and suggest the merger. Having been sworn in as an official bandit, Curtis and the band begin their march to the Ancients’ Grove. It is there that Alexandra will awaken the taproot of the ivy plant during a sacrificial ceremony. Prue meets up with the bandits and she and Curtis are happily reunited. When the North Wood army arrives, the two groups lay aside their differences to form a united front against the greater evil.

When the forces finally meet in the Ancients’ Grove, the battle is intense with the coyotes vast numbers overwhelming the unskilled fighters from North Wood. However, reinforcements from the Avian Principality turn the tide against the coyotes. Alexandra makes her way to the taproot at the Plinth and is about to sacrifice Mac when Iphigenia distracts her. Prue wills a nearby fir tree to bends its boughs and grab Mac from Alexandra’s arms. In the commotion, Brendan shoots Alexandra with an arrow, her own blood feeds the ivy and it rises to consume her. Brendan commands it to sleep again and the wood is saved.

The victorious army then marches into South Wood and frees Owl Rex and all the imprisoned birds. The government is overthrown much to the happiness of the citizens. Brendan, Owl Rex, and others remain to forge a new government. They establish new protocols and relations between the four nations within the wood. Prue returns home with her brother and is happily reunited with her parents. Curtis, however chooses to stay in Wildwood and live among his bandit brothers having found a place where he truly feels he belongs. He tells Prue that if he ever needs her, he will seek her out, laying the groundwork for the story to continue.