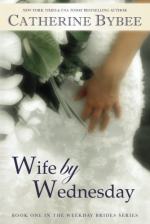 Catherine Bybee
This Study Guide consists of approximately 36 pages of chapter summaries, quotes, character analysis, themes, and more - everything you need to sharpen your knowledge of Wife by Wednesday.

This detailed literature summary also contains Quotes and a Free Quiz on Wife by Wednesday by Catherine Bybee.

“Wife by Wednesday” by Catherine Bybee is the story of Sam Elliot and Blake Harrison whose romance begins in the most unusual and unexpected way. Blake Harrison is a wealthy businessman and also happens to be the Duke of Albany, a small European country. His father passed away some time before and left a will that reaches out to Blake from the grave. Blake is a playboy and a womanizer. He is averse to commitment and marriage – his relationships never last past a year. But he faces a dilemma. If he wants the $300 million fortune from his father, the ancestral home and his title, he has to meet the marriage stipulation laid out in his father’s will.

Blake thinks of a way to have his inheritance and avoid commitment. He contacts Alliance which is a matchmaking company. He arranges to meet the company’s president, Sam Elliot, at a coffee shop to begin the process. He is stunned when a petite, pretty red-head turns out to be Sam – Samantha Elliot. But she is confident of his skills and her company’s abilities and convinces him that she is up for the challenge. She will do a thorough job for him and find a slate of candidates that very afternoon for his review. And she will make sure that these women know that they will not be living a fairytale marriage as a wealthy duchess. The girl he selects to fill the role of his wife will know that the marriage will end in one year.

Sam is a normal female and immediately recognizes that whoever is selected will have a hard time not falling for the handsome and charming duke. She makes a note to advise the girls that they should plan to spend most of their year-long marriage far away from the attractive and sexy man. Sam is thrilled with the assignment. She needs a high-profile client like Blake Harrison to boost her business. And she is facing financial difficulties because most of her money is funneled into an exclusive rehab home for the care of her younger sister, Jordan, who had become disabled from a suicide attempt. Sam has had a troubled past. Her father served time in prison for tax evasion, her mother committed suicide and her sister tried to.

Blake finds Sam fascinating and when he learns about her troubled background and financial difficulties, he arrives at what he determines to be the perfect solution. He offers Sam the year-long contract to be his wife. At first she is hesitant but her financial issues compel her to accept the offer. She reminds herself that she can’t think of this very attractive man as her real husband and that their relationship is just a business one.

But the two are very attracted to each other and soon after their marriage in Las Vegas, the inevitable happens. Husband and wife become lovers. And, although they don’t vocalize their feelings, they begin to fall in love with each other. A vindictive former lover of Blake’s tries to drive a wedge between Sam and Blake but in the end true love wins out. After a bump in the road in the form of the will demanding that there be an heir on the way, the growing bump in Sam’s stomach solidifies their love and relationship as well as meets the requirements of the fine print in his father’s will.

More summaries and resources for teaching or studying Wife by Wednesday.