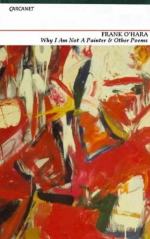 Related Topics
Meditations in an Emergency

Introduction & Overview of Why I Am Not a Painter

Frank O'Hara
This Study Guide consists of approximately 31 pages of chapter summaries, quotes, character analysis, themes, and more - everything you need to sharpen your knowledge of Why I Am Not a Painter.

Why I Am Not a Painter Summary & Study Guide Description

Why I Am Not a Painter Summary & Study Guide includes comprehensive information and analysis to help you understand the book. This study guide contains the following sections:

This detailed literature summary also contains Bibliography on Why I Am Not a Painter by Frank O'Hara.

Frank O'Hara's "Why I Am Not a Painter" was first published in 1957 in the Evergreen Review. Having a reputation for publishing some of the more adventurous works of the day, Evergreen Review was a fitting venue for O'Hara. Going against the predominant "neo-Symbolist" poetry of the timea poetry in the tradition of T. S. Eliot, which critic Paul Carroll characterized in his The Poem in Its Skin as "civilized, verbally excellent, ironic, cerebral"O'Hara's work is usually conversational and casual in tone. "Why I Am Not a Painter," in fact, like many of O'Hara's poems, reads as if O'Hara had simply improvised it off the top of his head.

Considered by many critics to be one of O'Hara's greatest poems, "Why I Am Not a Painter" reflects upon the creative process by comparing the writing of O'Hara's poem "Oranges: 12 Pastorals" with the painting of "SARDINES," a canvas by O'Hara's friend, the painter Mike Goldberg. Told in the first person from O'Hara's point of view, "Why I Am Not a Painter" is a narrative poem in which we see O'Hara dropping in on Goldberg who, at the moment, is starting his painting. After describing the process Goldberg goes through in order to complete "SARDINES," O'Hara reflects upon the process he himself goes through in order to write "ORANGES."

Both "ORANGES" and "SARDINES" have what appear to be unusual starting points, with O'Hara initiating the poetic process by thinking about the color orange, and Goldberg beginning his painting by brushing the word "SARDINES" on his canvas. In the end, however, neither of the finished works contains a trace of what originally inspired them: O'Hara's poem never mentions "orange" and Goldberg's painting no longer has the word "SARDINES" in it.

During the course of "Why I Am Not a Painter," O'Hara does not mention the title of either the poem or the painting he is discussing. He saves that until the end when he reveals that, despite the disappearance within each work of the original source of inspiration, the finished poem and painting are titled, respectively, "ORANGES" and "SARDINES."

Critic Marjorie Perloff, writing in her Frank O 'Hara: Poet among Painters, describes "Why I Am Not a Painter" as "a profound jest" in answer to the question of why O'Harawho was heavily involved with the art world and who eventually became a curator at the Museum of Modern Art in New Yorkwas not himself a painter. Indeed, on a certain level the poem is a joke. Yet, as critics such as Perloff have noted, the humor and levity one finds in O'Hara's poetry does not make his work any less profound.

More summaries and resources for teaching or studying Why I Am Not a Painter.

Why I Am Not a Painter from Gale. ©2005-2006 Thomson Gale, a part of the Thomson Corporation. All rights reserved.