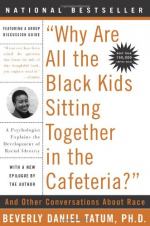 'Why Are All the Black Kids Sitting Together in the Cafeteria?': A Psychologist Explains the Development of Racial Identity Summary & Study Guide

Beverly Daniel Tatum
This Study Guide consists of approximately 25 pages of chapter summaries, quotes, character analysis, themes, and more - everything you need to sharpen your knowledge of 'Why Are All the Black Kids Sitting Together in the Cafeteria?'.

'Why Are All the Black Kids Sitting Together in the Cafeteria?': A Psychologist Explains the Development of Racial Identity Summary & Study Guide Description

'Why Are All the Black Kids Sitting Together in the Cafeteria?': A Psychologist Explains the Development of Racial Identity Summary & Study Guide includes comprehensive information and analysis to help you understand the book. This study guide contains the following sections:

This detailed literature summary also contains Topics for Discussion and a Free Quiz on 'Why Are All the Black Kids Sitting Together in the Cafeteria?': A Psychologist Explains the Development of Racial Identity by Beverly Daniel Tatum.

Beverly Tatum, a psychologist who studies racial identity, presents here a book about the development of racial identity and its connection to the racism prevalent in American society at the turn of the 20th century. The book focuses primarily on Black-White relations in childhood and adolescence. Tatum begins the book with an examination of the terms in which racism is understood. She first offers her admittedly controversial understanding of racism as a system of advantage based on race. That is, racism does not necessarily require any one person to harbor explicit racist attitudes. Instead, it is simply a social state in which race assigns some groups greater social and material goods than others. Due to her definition, Tatum accepts the admittedly unusual idea that Blacks cannot be racist, since their racial prejudices do not sustain or rest on a system of advantage. Racial identity, Tatum argues, is developing a sense of self in terms of one's racial classification. She maintains, in contrast to many, that the development of racial identity is healthy and natural and that it can be done despite the negative stereotypes placed on minorities in particular. These matters are discussed in Part I of the book.

Part II focuses on understanding the idea of Black identity in the United States, particularly the identity of that group of Americans descended in part from African slaves. Tatum describes the process by which young children become aware of race and the risks associated with growing up in a racial society of Black children internalizing negative stereotypes. In adolescence, focus on racial identity becomes more complex and explicit, and Tatum encourages the development of a positive, affirming racial identity for Black people. Finally Tatum focuses on racial identity in adulthood, about how to develop and maintain it. Part III focuses on Whiteness and explains why being White is a complicated social state, since Whites see their activities and characteristics as normal and racially neutral. Tatum addresses the role of affirmative action in combating White privilege and she vigorously defends it. Affirmative action should be goal-based to undermine the system of advantage that extends privileges to White people.

Part IV recognizes that racial identity is far from confined to Whites and Blacks, but extends to many Americans that Tatum classifies into three groups: Latino, American Indian and Asian Pacific. She tries to extend her concept of racial identity to these groups as well and to the challenges presented by multiracial families. In Part V, Tatum encourages explicit dialogue about race, as she does throughout the book, and offers advice for how to ensure that such dialogue is constructive and validating. In general, Tatum is a vigorous defender of multiculturalism, group identity based on race and open dialogue.

More summaries and resources for teaching or studying 'Why Are All the Black Kids Sitting Together in the Cafeteria?': A Psychologist Explains the Development of Racial Identity.

'Why Are All the Black Kids Sitting Together in the Cafeteria?': A Psychologist Explains the Development of Racial Identity from BookRags. (c)2022 BookRags, Inc. All rights reserved.