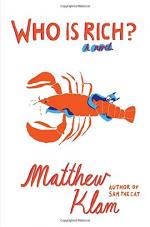 Who Is Rich? Summary & Study Guide

Klam, Matthew
This Study Guide consists of approximately 60 pages of chapter summaries, quotes, character analysis, themes, and more - everything you need to sharpen your knowledge of Who Is Rich?.

Who Is Rich? Summary & Study Guide includes comprehensive information and analysis to help you understand the book. This study guide contains the following sections:

This detailed literature summary also contains Quotes and a Free Quiz on Who Is Rich? by Klam, Matthew .

The following version of this book was used to create this study guide: Klam, Matthew. Who Is Rich? Random House – Penguin Random House LLC, 2017. First edition. The story is told from the first person narrative perspective of protagonist Rich Fischer, the text being occasionally illustrated by drawings.

The novel begins with Rich preparing to lead his first class at the artists’ conference where he has taught for the last five years and where, the year previously, he began an affair with the wealthy, lonely Amy. As Rich describes his sense of boredom and frustration with his overly familiar colleagues and under-talented students, he also describes his frustrations with his demanding children and similarly demanding wife Robin.

Rich’s reunion with Amy is short-lived, as they are both expected to appear at / participate in the annual conference baseball game. At one point, and as an indirect result of Rich’s urging her on, Amy severely breaks her arm. Rich is with her as she gets it set at a nearby clinic, and then while waiting for her to be officially released, he receives a call on his cell phone from Robin, who tells him that their children have both just survived life-threatening accidents. After a tense conversation that ends when cell phone service cuts out, Rich takes Amy back to her dormitory, then goes to fill her prescription for some powerful painkillers. When he returns, he finds that the anesthetic that had been given to her during the setting of the arm has worn off, and she is in a great deal of pain. He gives her a couple of the pills, and in the confused and frustrating emotional volatility of the moment, ends up taking two himself. This leads to an intense, drug-fueled sexual encounter, after which Rich leaves to go to a fundraiser for the conference.

During the fundraiser, Rich becomes increasingly intoxicated (on both the aftermath of the pills and the alcohol poured during dinner) and increasingly depressed. He returns to the small, ramshackle apartment where he is staying for the duration of the conference, determined to hang himself. His attempt fails, and then he discovers Amy there. They spend the night and the following morning together, bringing each other to sexual and emotional climaxes that result in both of them declaring their mutual need for each other.

Throughout the narrative to this point, Rich has interjected information about his histories with Robin (troubled by physical ailments and a painful family history) and with Amy (troubled by her marriage to a selfish, insensitive businessman). He also finds himself comparing his experiences of having less money (in his relationship with Robin) with his perspectives on people who have a great deal of money – in general, the wealthy of America, and in particular Amy, whose husband is one of those wealthy.

Eventually, Amy leaves, and Rich is left alone with his contemplations on what has happened to him. He also discovers a pair of expensive earrings that Amy had left behind, and is tempted to pawn them and keep the money, but instead spontaneously throws them into the ocean. Meanwhile, he contemplates turning the material of his life into a new comic book or graphic novel, which he had done with his life in the past to some success. He starts to make plans and drawings, but has to attend another party. There, a flirtation with an attractive woman ends with him realizing he does not want to do that kind of thing any more. The morning after the party, which is also the morning of the last day of the conference, Rich wakes up outside, having slept the night on a raft. He watches the sunrise, makes his way through the town (watching its citizens get on with their lives) and returns to his dorm, to the bed he had shared with Amy, and sleeps.

More summaries and resources for teaching or studying Who Is Rich?.

Who Is Rich? from BookRags. (c)2022 BookRags, Inc. All rights reserved.