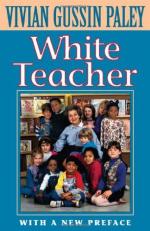 Vivian Paley
This Study Guide consists of approximately 27 pages of chapter summaries, quotes, character analysis, themes, and more - everything you need to sharpen your knowledge of White Teacher.

This detailed literature summary also contains Topics for Discussion and a Free Quiz on White Teacher by Vivian Paley.

White Teacher is a non-fiction book written by kindergarten teacher Vivian Gussin Paley. Mrs. Paley shares with honesty her experiences teaching in an integrated school during a time when racial tensions were at their highest in the world outside of her classroom. Mrs. Paley wanted to be the best teacher she could be to all her students, but was unsure how to address racial differences within the classroom. Advised to ignore race and focus on behavior, Mrs. Paley quickly came to the realization that ignoring race gave the wrong message to both the black and white children. Mrs. Paley began openly acknowledging race in her classroom while at the same time tackling many of her own struggles with race and racial stereotypes that influenced her every action in and out of the classroom. White Teacher is an honest, direct look at the struggle teachers face in their attempts to address these complicated issues and shares her solutions as well as the behaviors and attitudes she continues to struggle with.

Mrs. Paley attended college in the south and therefore her first days in the classroom were in southern classrooms. When Mrs. Paley returned to the Midwest where she had been raised, she found herself teaching in an all-white school even though she believed she should be teaching both black and white children. When Mrs. Paley was asked to teach a single black child in her all white school, she did not know how to address the issue of racial differences. The child, Alma, ignored Mrs. Paley and most of the other children, as though uncertain how to interact with them. Mrs. Paley reached out to Alma and her family, but nothing seemed to work until the day Mrs. Paley consoled Alma after she had gotten hurt, using words that might have been spoken by a black woman. Alma began to trust Mrs. Paley after that incident.

The following year Mrs. Paley had two black children in her classroom. One of these children, a young boy named Fred, was infantile in his speech and often acted out, disrupting the class. These behaviors caused other teachers to suggest Mrs. Paley have the young man removed from her classroom, but they never said anything like that about the other children who behaved in a similar manner. Mrs. Paley went to her colleagues and asked for suggestions about how to deal with the racial differences between these black students and the white students. Mrs. Paley was advised to ignore race and focus on behavior. Mrs. Paley knew this was not the right thing to do, but also knew she had no other suggestions.

Mrs. Paley took a job at a private school a short time after this that was integrated. Many of the classrooms had a mix of white, black, and Asian students. When Mrs. Paley met with a parent, the parent informed her that she did not want her child's race to be ignored. The woman felt that being black was special and should be celebrated. Mrs. Paley began using open dialogue with her students about race, making comparisons between her skin and the skin of another child or telling a child how beautiful his or her skin made them. At the same time, however, Mrs. Paley came across a child who used white as a derogatory term, similar to those used to hurt black people. Mrs. Paley found this uncomfortable and she did not know how to deal with it, essentially ignoring the jab.

The child who hurt Mrs. Paley by calling her a white lady had other behavior problems. Mrs. Paley dealt with them by using a new technique taught to her at a seminar. When these techniques did not work, Mrs. Paley punished the boy in a time-out chair, eventually gaining some results. Mrs. Paley also helped this boy stop using foul language by limiting his use of certain words every day. Mrs. Paley was deeply affected by this boy, not just because of his behavior, but because of the sense of being different, of being an outsider, that more than likely caused the poor behavior. Mrs. Paley was raised to be a Jew before anything else. Mrs. Paley knew what it was like to attend an integrated school and to feel as though the Jewish part of her was being ignored by the adults and children around her.

Another year, Mrs. Paley had a young girl in her class who created Jewish club, embracing this fact about herself and rejecting all else. Mrs. Paley reacted to this child and her needs by sharing with the class music from different cultures to show that everyone has something special about them and that no two children or cultures are exactly alike. Another year, Mrs. Paley had a student teacher who was black. Mrs. Paley watched this student teacher closely, learning many ways to deal with the racial difference that often left her unable to decide on a proper course of action. Later, this student teacher went to teach in an all black school, insisting that she was needed there. The student also suggested that Mrs. Paley go to an all black school as well, but Mrs. Paley knew she was not ready to teach an all black class.

Yet another year, Mrs. Paley had a young black girl in her class who did not know how to play. At first Mrs. Paley thought the child might have a learning disability, but she soon came to realize that the child had not been allowed to play with other black children because her father disapproved of the black children in their neighborhood, leaving the little girl with the impression that all black children were bad and not to be played with. Slowly, Mrs. Paley managed to help this little girl feel safe to play with the other children. In the same class there was a strong group of black girls who often played exclusively with one another. Mrs. Paley watched their play, learning that their choice of friends had little to do with race and more to do with personality.

One afternoon, a friend of Mrs. Paley's pointed out to her that she spoke of the children in her classroom in racial terms, often referring to one group of girls as the black girls. Mrs. Paley realized that she still had a long ways to go in her thoughts in regards to race and that she had to change her own thought processes before she would ever be able to make a difference in the classroom for these children. Mrs. Paley had learned a lot about teaching an integrated classroom, but she still had a long ways to go.

More summaries and resources for teaching or studying White Teacher.